Getting over the solitude

I have always called myself a closet writer, and in some ways I may always be a closet writer.  Maybe most writers are, and the only other people we can really talk to about writing is other writers.

Why?  I don't really know the answer to this, but I'm going to tell you what I think.  Partly, it's because I don't know if other people really care or understand what writing is all about.  I've had more than one conversation with different people about writing, and when I start geeking out about how characters can shape conflict and vice versa, bored, sleepy expressions meet me.  I assume people don't really care.

Or maybe they do care, I'm not sure.

More than that, there is a part of being a writer that is a little like being a superhero.  I have this side of me that can shape conflicts and characters.  I mold different worlds and people in a way that would make Superman and Batman at least a little envious.  The truth is, I can't really explain this to anyone who doesn't appreciate the process a little already, so I hide my secret identity (it's not that glamorous) and write.

And probably write badly, more like the Greatest American Hero than one of the more suave and effective superheroes that everyone wants to be.  I've lost the rules to the superpowers and mostly fumble through everything.

Sometimes, I've tried to explain how important writing is to me.  Trying to explain this comes out horribly, like trying to explain how a stupid cape can have superpowers.  The thing is, I love to write, but when I open up my writing to other people--anyone, even strangers--I feel like I'm exposing myself and everything in my entire soul to ridicule or maybe even worse.  Even if I tell people I write, I'm waiting for them to laugh or misunderstand.

But that's the hard part.  Eventually, writers should share who they are and what they do. 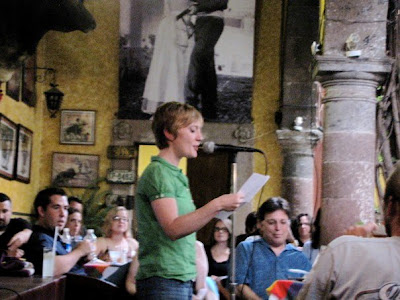 But I read part of my story in front of about 60 people in San Miguel de Allende, Mexico, in one of the coolest restaurants you would believe, complete with the huge columns and monstrous viney trees growing in the center of the room and out the roof where the rain would fall in, and massive paintings of Marilyn Monroe and historical Mexican generals sitting around a table in the pose of "Dogs Playing Poker."  I'm not really more open to sharing my writing now, but knowing that I can do this, well, maybe it makes it a little easier.

And sometimes--I swear sometimes--sharing what I write makes a difference in me and in other people. I suppose that is really the point.  No, it doesn't make it any easier.

Posted by Heather McGrail on May 30, 2013
Email ThisBlogThis!Share to TwitterShare to FacebookShare to Pinterest
Labels: McGrail