Romance in the Age of Babylon

Valentine's Day is nearly upon us and, as I will not post again until well afterward, I thought I would take this opportunity to talk about romantic entanglements. Specifically, I mean those that occur between characters within a story. I realize that not every story will have such things, but a great majority of them do. What follows is my opinion (and I mean this literally, as I have no scientific data or opinion polls to prove any of it) on how these situations are best handled.

Writing plausible romantic scenes is very difficult. Of all the elements of the story, this one particular aspect has the most pitfalls. It is so easy to go too far one way or another. Too much detail and you are essentially relegating yourself to cheesy pulp romances or, if you've gotten to graphic, erotica. There are audiences for both these things, but it's not what I want for my novel. I suspect that the same is true for most authors. The other end of that spectrum is to pull away from it so much that the emotion and/or passion is lost to timidity. In this particular aspect of your story (if you choose to add it), it is the literary equivalent of walking across a bed of embers.

There are hundreds if not thousands of great examples of how to do this. I suspect that there are a hundred times as many examples of how not to evoke these emotions. I will leave to ferreting out of bad examples to you, dear reader, but I might suggest the "literature" section of your local box store as a starting place. As for a good example, there are a few that I would put forward. However, in the interest of time, I will focus on just the one. No, not that one. But rather, the story/mythos from which THAT one is derived.

There is a myth that was put down to parchment by Ovid around the turn of...well, everything really. The story he penned was that of Pyramus and Thisbe. This tale was likely old when Ovid crafted his version, but it has survived these 2000 some odd years for a reason. They were friends from childhood, Pyramus and Thisbe, but there families hated one another (sound familiar?). Once they had grown, they were forbidden from seeing one another. Yet, they were able to talk to one another through a crack in the wall between their two houses. They fell in love simply through whispers across a divide. The details do not matter so much at this point as anyone with the inclination towards writing will already be imaging the gentle words and loving responses.

Simple. Subtle. Finesse.That's how I feel it should be done. 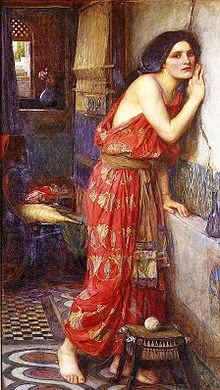