The Gift of a Book: My Imagination Takes Flight

In 1978, I was ten years old. This was the year that saw the glory days of the Bee Gees, "fly away" hair, and polyester lapels big enough to launch aircraft. I was never much of a disco fan (I have always felt that disco died for a reason), though there do exist pictures of me in clashing forms of polyester plaid. Yet, there was one event in this year that continues with me even today.

Now, none of the things that I am going to talk about are tragic or soul affirming (I strive not to be a script from the Hallmark channel). No life affirming, come from behind win on a sports field or dire family tragedy happened that year. It was all much simpler than that, really.

By Christmas 1978, I was already an avid reader. At the time, I was reading books about animals such as Black Beauty and Doctor Dolittle. However, that year I found a small package with a gold bow under the tree given to me by my Aunt. I remember her saying that she wasn't sure if I would like it or not, but that the guy at the store had said that it was popular. What I found within was a boxed set of the Lord of the Rings series.

It was a special boxed set addition of paperbacks. The box was gold with mandelic designs with fantastic names scribed in alluring script. I knew nothing of Tolkein and his works, but decided to give it a go anyway as I had read nearly all the "horse" books, as I called them, in the school library. What I found in those pages set my imagination farther into flight than any other story ever had. This world that he had created filled my head with creatures and places I had not even conceived of prior to this.

When I finished all four of the books (The Hobbit was included in the set), I wanted more. I began reading every fantasy novel I could get. David Eddings, S.R. Donaldson, Anne McCaffrey, Julian May, and Katherine Kurtz (just to name a few) all had stories which fed this desire. I have dozens of such books now, but it was that first copy of the Lord of the Rings that set me on this path.

I still have that boxed set. The books are beyond well worn by now. The covers are frayed and torn. The pages are yellowed with age to the point of being nearly brown at the edges. Thirty years of notes and scribbles adorn the pages, though some have faded to illegibility. The box has lost some of its luster, but I still feel the urge to trace the patterns whenever I hold it. I have other copies of the series now, but this - this worn traveler - is my favorite even today. 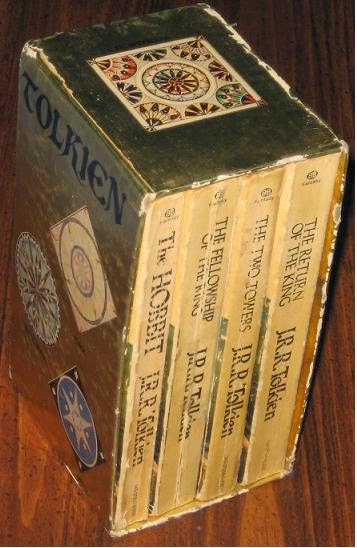