Olaf and Sue: The Blanket Fort

Olaf Jebediah Thorsen the Third wandered into the living room, distracted only briefly by a flash of blue and red in the fishbowl perched atop the upright piano in the corner of the room. Mr. Sushi the betta fish flared his technicolor fins from behind the curve of the glass. Olaf hated that name. Sue had, of course, given it to him, but Olaf had always thought he looked like a "Frank".

Little Olaf turned and continued on his way to the couch. He passed his father, Arthur Thorsen, who sat in his green and gold plaid recliner intent on the screen of his Kindle. A wry smile twitched at his father's lips as he read. Olaf didn't know what his father was reading, but he had seen the cover with it's drawing of a child sleeping with tigers. Why his father would find that funny he did not know, but he was glad for him that he did.

He clambered up onto the overstuffed green cushions and reached for the purple and white afghan that stretched across the back. The blanket caught a bit as he tugged, pulling him off balance, causing him to fall forward. The afghan fell atop him like some mothball scented fishing net tangling his arms and legs until he was nothing more than a crocheted lump in the middle of the couch.

"What are you doing, Ollie?" asked Arthur absently.

Just then, there was a great cry from the back of the house. "CHARGE!"  shouted Sue as she thudded down the hallway towards the kitchen. Her high-pitched war cry echoed relentlessly through the house as she stormed ahead. Her charge turned abruptly to a cry of surprise followed by the sound of uncontrolled sliding and then falling. Olaf knew she had slipped on the hall rug again.

After a brief scramble, he heard Sue exclaim, "Sabotage!"

"Hey, Momma," she continued without pause. "Do we have any red Jell-O?"

Olaf heard his father sigh.  He then reached over to help Olaf loose from the afghan. Little Olaf looked into his father's tired eyes and saw understanding. 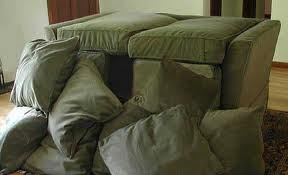