Lost In The Stonework

I was laid up in bed with the influenza version of the plague last week. It was awful, but it did provide me with the opportunity to read Ken Follett's - The Pillars of the Earth. Not my usual fare, but it was available and it's always good to try new things. The story is a fictionalized history of the building of the Kingsbridge Cathedral through the perseverance of a few good people in a drastically myopic age.  It has thousands of histo-facts and actual historical events (e.g. - a compelling account of the death of Thomas Becket) that are adroitly woven into the tapestry of the novel that a reader could forgive the early info dumps and the occasional use of the word "awesome" or the phrase "hot body".

There is one scene in particular that I latched onto during this time. It's  near the middle of the book (you know, the one about the middle ages. HA!) during the transition of the main protagonist from Tom Builder to Jack Jackson. In this scene Jack is carving laboriously at a figure that is meant to decorate a capitol of one of the columns in the cathedral. Jack is completely focused on this figure -  A tortured figure of a man made to look like he was trying to hold up the entire roof on his own. so consumed with the work is Jack that he neglects to keep track of his oafish step-brother Alfred to no good end. When finished, the figure is lauded as a marvel. Something new and far beyond the simple dog-tooth or castellan patterns traditionally used. Of course, in the end, that particular capitol was put in the back with the figure lost in shadow.

So, this made me think a bit. How many authors do you know (perhaps including yourself) who get lost in the details? I know a few. Authors who are so in love with the the facts and details that form the stone foundations of the world that they want to build that they lose sight of the cathedral. This is true of any genre. It doesn't matter whether you're writing about the Battle of Gettysburg or a Wild Man lost in his own mind.

The temptation to obsess over ever carved leaf is great for us all, but it must never take us away from the story we are trying to build - our very own cathedral of the mind. 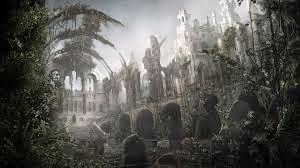