I've been thinking about how to approach antagonists in the last weeks, and really, the best way for me to look at antagonists is from the conflicts.  If you look at the generalized four conflicts, then we can examine the four types of antagonists.

Of course, I will elaborate more in the future.

Here are the four, generally-accepted conflicts.  Yes, I'm using the term "man" for character because I find this generically ironic.

1) Man versus nature--this is man against storm or force of nature.

4) Man versus man--this is the more typical and common conflict, in which one person antagonizes another.

Instead of breaking these down too much, I'm going to pick an example that embodies all of these--a rare occurrence in literature.  Certainly, many novels develop different conflicts and vary the levels of antagonists.  This is what makes literature great. 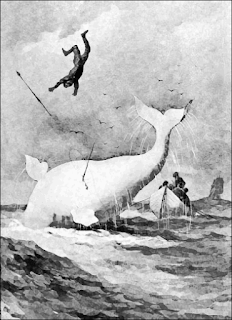 Man versus nature--I sometimes struggle with this conflict because nature can quickly become the wrath of God or some personified being that hold the anthropomorphized traits that make me annoyed at humanity in general--we see ourselves in everything.  Something about the whale against Captain Ahab works in this novel.  I believe that the whale is out to destroy all of them.  I believe that this whale is vindictive and angry and hurtful.  And the ocean haunts us in a dark, creepy way that we should explore more in fiction. 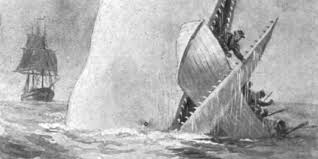 Man versus society--certainly, this is a lesser part of the novel, but the crew seeks mutiny over Ahab, seeking to overthrow the authority of the boat, and therefore, the government and contract they signed.  Ahab stands against all of them.  And mostly, he stands on his intense vengeance.

Man verses self--this works in different levels, but mostly, we see this in the conflict in Ishmael's narrative between following his captain or trying not to be stupid.  Either way, the crew fight against themselves, trying to find the strength inside themselves to continue.

Man versus man--Moby Dick has this on several levels.  Ahah against Ishmael, Ahab against Stubb, Ahab and Starbuck, and really anyone else and Ahab. 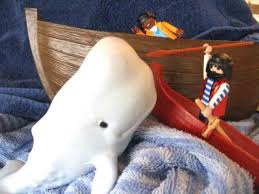 The brilliance of this novel becomes intrinsic in ways that I cannot explain.  But here, the simple conflict of man versus nature permeates the novel to create a dozen other conflicts with other people, creating mutiny, discord, and death.  So who is the central antagonist?  Who is the bad guy?

The antagonist is the whale, right?  Or is Ahab the bad guy?  Even Ishmael is an antagonist in the sense that he stands by, willingly permitting the fate or the Pequod.

What makes a good bad guy?
Posted by Heather McGrail on June 01, 2015
Email ThisBlogThis!Share to TwitterShare to FacebookShare to Pinterest
Labels: McGrail