I'm afraid, dear readers that I will have to dispense with my usual salient and well reasoned diatribe of the inner workings of the authorial process. The demands of career and family have left my mind mind in a dysfunctional state, such that I am unable to procure a viable discussion. In short, my brain is tapioca and I can't come up with a decent topic. Therefore, I will do what all great middle managers do in such a situation.

The following is a snippet from my novel. This is a much older version, but what the hell.


The pattern flashed brightly then faded as does summer lightning. Darby’s sight went completely dark with only the afterglow of the pattern fading in his eyes. Moments later his sight began to return. Faint glimmers of afterglow still lingered but the hilltop slowly began to return to him. The second moon, Morobe, had risen adding its light to Dongara’s. Morobe’s face was that of liquid garnet and being the nearer of the two moons was the most intense. Darby stood up looking around him with eyes that were becoming increasingly adjusted to the night. As he looked over the grave he found that the flowers he had transplanted had grown to cover the entire mound. Morobe’s light reflected brightly off the petals turning them crimson while the dew droplets on the leaves shone like darkling stars. 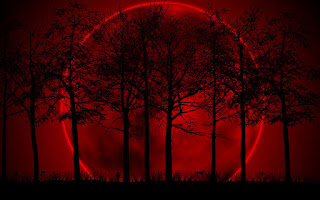