I had several ideas for my turn at bat in the Forge this week. Topics drawn from a range of sources such as the Marvel movies to the pile of books in our living room that we are just now sorting out. Yet, I pushed all those aside after yesterday evening. You see, last night my son took part in his very first school pageant.

It was mostly just the kids singing variations of nursery rhymes prior to the 5th grade choir's main event. The soloists were voicing notes that are generally only heard from dyspeptic elephants with laryngitis while the spotlights seemed to be manned by drunken epileptic sailors. Still, they all belted out their songs with the passion and fervor of those who truly enjoy what they are doing.  Their voices, when  together, were focused and clear and it (to be quite truthful dear readers) inspired me.

Yes, yes. I know what you're thinking. It's your son. You're completely biased.

And yet, there is more to it than that. This event brought me back to my own childhood. I remember vividly singing in a Christmas pageant when I was about my son's age. I remember it because I got in trouble for singing the "Batman Smells" version of "Jingle Bells". 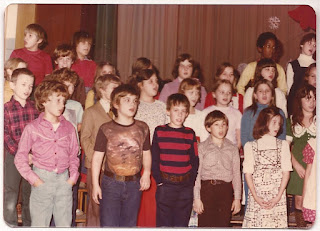 I remembered how excited I was when the music teacher brought out various instruments and had each of us try them to see which one suited us best. Of course, the following week he gave us each a plastic alto recorder and told us we wouldn't see real instruments for another year. I was not happy. I was so ready to become the trumpet player I always (you know, since that day last week) knew I could be. Probably just as well, though, as it turns out I'm an awful brass player. It was saxophone for me for the following ten years. 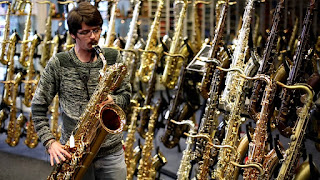 These early days of music discovery were my passage into the arts. Writing came later of course, but as I sat there in bleachers made for keesters half the size of mine watching these children belt out a rap version of "The Cat and the Fiddle", I smiled in remembrance of those early days. Would I have had the willingness to explore the written word had I not had those experiences? Perhaps not.

So I sat there and smiled and cheered them on (trying not to go full Eastside as I did). Watching as they took their first steps into this soulful world. This, their beginning of a world full of color and song.