The Professor ran across a writing prompt some time ago that required the would be author to describe their desk. She wrote about her bastion of light and words in ordered fashion. Randy took the baton and described to us the methodic chaos of his own fortress of solitude. Who am I to ignore tradition, then? Thus, herein follows the description of my desk(s).

Now, this gets a bit tricky for me as I have more than one location where I write. I have mentioned before that I have notebooks and notepads nearly everywhere such that, when an idea strikes, I may write it down right there and then. I have also mentioned that I do this because I have the memory of a goldfish with ADD. But, we'll exclude those as this post is meant to be about desks.

There are three desks I write at throughout the course of the day. The first is my desk at work. A hand-me-down executive desk that would be ample space for most people. Four drawers (two big enough for those hanging file thingees and two smaller ones) are set one of each on either side for my storage needs. Now most people would have organizer trays full of pens and the like. Not so this creative monkey. I have hand tools and drill bits in the left side and a bazillion (plus or minus a zillion) pens, pencils and novelties acquired from 18 years of conventions in the right. Those lower drawers? That's where one keeps important documents and the like? Silly reader, that's for normal people. No, that's where all the things I don't know what to do with and will probably never see the light of day again go. The important stuff goes in chaotic but organized piles. Stuff what needs doing on the left (ish) and things that can wait on the right. Oh yes, and there is a computer. It is older and requires a couple of restarts every so often, but then so do I. This is where I write in the slow winter months and over lunch. 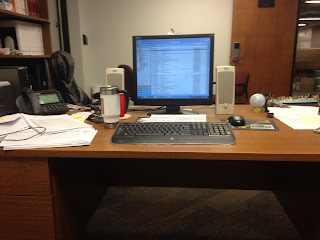 The second is at home. It is an old roll top desk that my grandfather built for me. It has his name scrawled in permanent marker and the date it was completed. 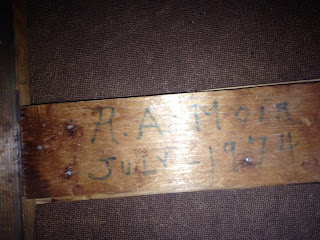 This desk has been with me through three states and nearly 40 years. There are still Star Wars stickers on the pull out shelf from when I was 10. Pen marks streak the wood from decades of use. The wood has warped a bit over time (mine was the first he built, so it has some defects) I wrote at this desk until this last move. You see, one of the legs is damaged. I have fixed it as best as is possible, but the repair isn't stabile. I won't risk losing this ark of memories by banging away at a keyboard on it, so it sits as a repository for all the hard copies of my works. Well, that and some dreadful pictures from high school. 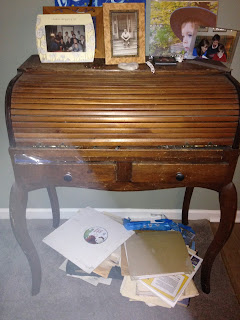 So, that brings me to my last desk. This is the simplest and most productive of all of them. What is this uber effective writing arena, you ask? Put simply, it is my lap. I simply sit my butt wherever is convenient, place my laptop on my lap, and then start writing. No distractions. No worries about imminent collapse. Nothing but me, the keyboard, and that damnable blinking cursor.

I hope that Keith takes the baton from me and rolls on with this theme (that will be funny to you when you read his post) if for nothing else than to get the full mileage out of this shared theme.