A Short Trip to the Cold War

At the end of September, I accompanied my father to an Air Force reunion. When Lana and I were in Cuba, Missouri this summer just before my mother died, dad had paperwork for that reunion sitting on a table beside his chair in the living room. Mom was on hospice. She had gone with him to the reunions every two years except for the last one because of her health. This one was to be in Washington D.C. and I could tell he really wanted to go. He was 83 at the time. I offered to go with him, as I had not been to Washington and I thought it might be interesting to hear stories about what he used to do.
Dad put in 27 years in the Air Force, leaving as a Lt. Col. and spending a lot of the time as a pilot, flying in 18 different types of aircraft. The reunion we went on was specifically for one airplane, the B-47 Stratojet. I remember this airplane growing up very well. It was a very beautiful, sleek airplane and not very well known to the average person. It's replacement, the B-52, would become much more famous. 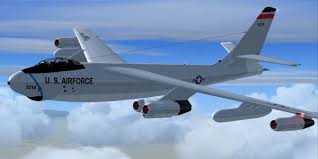 Military people, and especially my father, are proud and silent about the past. They tend not to talk about what they did until they get around others of the same ilk. I knew a little about that magnificent plane and its purpose. I also knew some of what dad did back in his early days, but during four days of listening to eighty men tell stories during dinner and drinks, I learned so much more.
The B-47 was THE bomber, actually THE plane of the Cold War. It was designed and built by Boeing and was the first jet bomber of the U.S. That sounds simple but it wasn't. If you look at it, this plane was way ahead of it's time. The first one rolled off in the early fifties and had swept-back wings, something never seen before. It flew at well over 500 mph. It flew long ranges and was capable of inflight refueling. It had JATO, a rocket assisted takeoff component, that enabled it to get off with heavier loads or off shorter runways. It also had the capability to carry, for the first time, up to 10 nuclear weapons.
Because of the new swept-back wings, the B-47 was very tough to fly. There were no computers back then to stabilize the plane. It was all by feel. The plane wanted to roll and yaw at different speeds. It was strictly because it was all so new and different. 474 men lost their lives during the life of the B-47 and yet not one plane was ever shot down. Every airliner in the skies today was patterned after the B-47. The first swept-back four engine airliner, the Boeing 707 was a direct copy of the B-47, and the 727 was also designed from the B-47. Some of the first pilots in the airlines were having such difficulty flying the 707 and 727, Boeing requested the Air Force send some B-47 pilots over to help teach airline pilots and instructors how to fly the new planes.
Some of what I already knew and what I learned more about involved inside the Cold War itself and specifically The Cuban Missile Crisis. During the entire Cold War, we had bombers up all the time, 24/7, with nuclear weapons on board, just in case Russia attacked us. Their mission was to proceed to targets already selected for them and attack. My dad that for a few years, serving as a pilot on a crew. The B-47 had a crew of 3; a pilot, co-pilot, and navigator.
When I was very small, we were stationed in Homestead, Florida, just outside Miami. A flight of three B-47's would take off and fly and protect us from someone who didn't attack us that day. Meanwhile, other B-47's were taking off from other bases around the country doing the same thing, taking long journeys, in big circles, then returning home, to be replaced by other brave crews.
At the same bases, on the flight lines, near where the planes were parked, were little houses called alert quarters. Crews took turns manning those for weeks at a time, just yards from their planes in case war broke out. The idea was to be in the air within minutes.
A quiz for you. How many of you knew this. During the Cuban Missile Crisis, when we were on the brink of nuclear war, did you know that at EVERY major airport in this country, there were three B-47's loaded with nuclear weapons, ready to take off? I'm talking New Orleans, St. Louis, Kansas City, Indianapolis, Chicago, Salt Lake, Portland, etc. You name a city, they were there. Three each.
Where were we? Right in the middle of it. Miami. That was one of the topics of conversation at the reunion. "Where were you during the Cuban thing?" Dad answered, "Homestead." That got some stares and reactions. He wasn't home during the entire time. Goes without saying.
I could go on and on about what I learned. I met 80 proud, brave men that served their country with distinction. Two years now the reunion will be in Omaha, Nebraska. We used to live there when I was 12. Lord willing, I would like to go to that reunion too and look up our old house and the school I used to go too.
Over 2,000 of these planes flew to protect us from nuclear disaster. Today, the Air Force doesn't even have that many planes in its entire inventory. It is a different time with different leaders. We fight enemies without uniforms. We fight without will. One thing that is true today as it was true yesterday, the men and women who wear OUR uniforms are brave and will fight no matter what.
On our trip, even on our flight, my dad and others wore a cap with the B-47 logo. Wherever we went, people stopped the men and families and thanked them for their service. They were all deeply moved by this. I can tell you myself this was not always the case. The 70's was not a good time for the military, even the family of the military. If you see someone who served or serves, thank them. They will appreciate it.
I always knew my dad was a hero to me, but after that trip and hearing the stories and learning more about what he did for us and how difficult the times were, I now know and appreciate it even more. Thanks for being there dad.
Posted by Unknown on October 27, 2016
Email ThisBlogThis!Share to TwitterShare to FacebookShare to Pinterest
Labels: Krulik