An unsigned letter creased in quarters lay between his hands, his left thumb smoothing out the deep folds against the desk with care to not smudge the oily pitch that penned his heart like gild.

The knocking of horses upon the frozen stone below his window was carefully laid and rhythmic to an eventual whisper.

A smudge formed a mirrored assault from left to right of the symmetrical center of his letter; the words ‘love, more than’ barely legible from undried ink. What more could his words reveal? Unhidden, the linearize thoughts of certainty evoked vividly from the parchment.

His right hand hesitated, and the feather stilled. He returned his pen to the inkwell filled with the shadowy world, imprisoning his candid words. What more could his chain be linked? Censored, God declared such heretical thoughts be abandoned to perdition.

The rap of the King’s Life Guard upon his door stilled his breath from the desire to read his whispered words aloud.

An unsigned letter creased in quarters lay upon the flame, his left thumb counting down the fading knock within his chest. 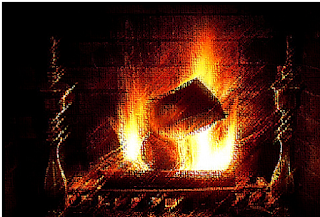 The Absentee Writer Podcast
Posted by Randy Wireman on November 05, 2016
Email ThisBlogThis!Share to TwitterShare to FacebookShare to Pinterest
Labels: Wireman