A New Floor for Our Home

Lana and I moved into the house we are living in during the month of June, but the year was 1990. That was a long time ago. Except for the two bathrooms and the kitchen and the foyer, and well, yes, the garage, the rest of the house was carpeted. Guess what? It had the same carpet since we moved in. It had worn well until the last couple of years. It was of very good quality, but it had finally reached its time.
The next question became, what to do? Carpet again? Asphalt? Hardwood floors in the form of laminate? We talked a lot about it and studied it and asked people who had done it all ways and we chose laminate floors. In November of this past, we went to my new favorite store, Lowe's, and chose a pattern. Actually we chose two patterns. We chose a cheap pattern for our two back bedrooms and a more expensive Pergo brand for the master bedroom, the hall, and the living room.
I did the calculations of what we needed, bought the tools based on watching YouTube, and had the store deliver the flooring, a full pallet of it. We decided to start in our daughter's old bedroom, with the cheap stuff. Boy was that a bad move. Remember that old saying, "You get what you pay for?" Take it from us, if you ever do this kind of project, don't buy the cheap crap. It wouldn't go together, stay together, or generally co-operate. We wasted several days in that bedroom before we packed it in and took back as much as we could of the product, exchanging it for the more expensive Pergo and started over. 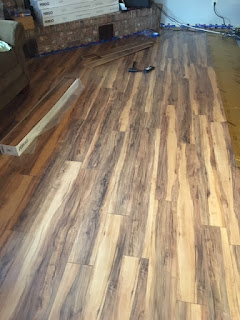 If you want to test a relationship, do a big project together. We are both pretty organized people and it didn't take long for us to get a system down. I have depth-perception problems and problems visualizing how things will be, where Lana is great at it. So, she took over and snapped the boards together on the floor. I kept the supply coming and had a setup in the garage for cutting the boards. I would also do what is called undercutting. When you got to doorframes, we would have to undercut the frames with a special saw to make the wood fit underneath. Now that is a joy I can't even begin to tell you about. The hand saw I used was not fun until Lana went on Amazon and bought me an electric version. I think I now owe her another diamond ring.
We, after thirty-five years, I guess are lucky, or blessed, or matched well, or something, because we have gone through this project unscathed. We work well together. No cross words. No yelling. The only thing that happens is you have to remember that we are dealing with two people in their sixties. There is a lot of getting up and down and bending over. Let's just say at times you wouldn't want to light a match in the room and you might want to wear a mask. It has gotten intense. Our dog, the rat with fur, known as Izzy, has even left the room many times. I expected to see her come back in the room wearing a mask. Let's just say a canary wouldn't have survived.
We are nearing the end as I write this, finishing up the living room and going down the hall. We have talked of selling the house in the next year or so and building a new, last home. This had to be done no matter what. It looks beautiful. I'm glad we did it and it will add value to the home. Just don't ask us to do it for you. It would cost you WAY too much. Oh, and you couldn't stand the smell.
Posted by Unknown on January 19, 2017
Email ThisBlogThis!Share to TwitterShare to FacebookShare to Pinterest
Labels: Krulik