Well, if you read my last post, you found out I was trying to install a wireless security camera system around our house. I found out how inept I was when it came to computers and everything being "Geek".
I didn't know this saga would continue so long and grow even more complicated, so guess what? I'm back here to tell you more. Yep, that's right, it's Geek 2. Just when you thought this moron could for sure find his way out of this horrible problem, well, you're wrong Buckwheat. He's still waist-deep in it.
When we last left our clueless, inept hero, namely me, I had a camera system that I had configured the cameras to my wifi router and I thought I was ready to install them. Wrong! It turned out when I took the cameras out of the home office where the router was, I lost the configuration. Well boys and girls, long story short, my good old router wasn't putting out a strong enough signal for the camera system. What to do? I got on the phone with a real geek. Not my favorite thing. First of all they never speak fluent English. It's nice to know that India is full of people working at tech support, customer service, and telemarketing. First off, this guy claims his name is Bob. Really? That must be how they are trained. "Just tell them some simple American name because they wont be able to pronounce your real name. Use Bob or Phil or Ralph or Sam."
So good ole Bob tells me I need a signal booster for my router which I can get from Best Buy.  So I truck on over to Best Buy and get one, for $129. I got it hooked up.  Now it was time to re-configure the cameras. This was going to be a piece of cake since I had already done it. The instructions came from the cameras app I had downloaded onto my phone.  Guess what? It didn't work. I couldn't even log on to the app. I wanted the security cameras to capture the moment but of course they didn't work.
Back to the phone, this time with the camera people. Everybody is from India. Another guy. Apparently they don't hire women. One of these days maybe I'll talk to someone named Doris. I got Phil this time. Do you have any idea how badly I wanted to ask about his name? Or where he lived? Or which football team he rooted for? I was nice and moved on. I told good ole Phil of my problem of not being able to get on the app. He very cheerfully told me, "Oh yes sir, that is a problem of widespread consequences. We are having an app problem. In few days there will be a new app that will solve problem."
I wanted to throw a slide rule through the phone. If you don't know what a slide rule is, look it up. The bottom line is, I wanted to throw something technical at him. Something Geeky. This project was taking too long. Phil was holding me back. Even the Geeks needed Geeks. Which brought up a question in my head. This is how I think. Who do they call? India? America? Jersey? "Yeah, this is Mikey, what ya need?"
"I see. Well, first off, you bought defective crap. You's should never ever buy foreign stuff like that. That being said, I'd box that stuff up and sell it for fifty cents on the dollar to the first sucker you can find and call me back and I'll set you up with a real sweet system with my cousin Eddie." 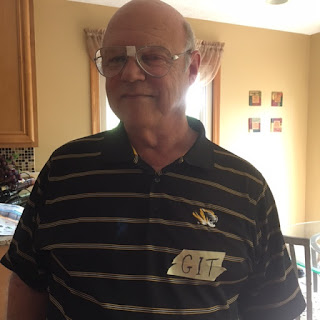 So, what happens from here? Who knows. I'll give it a few days and see if they have fixed the app. In a week I may end with a few cameras hanging up as a deterrence system. I will use a red magic marker to make it look like the cameras are on. This is nuts. It isn't good when geeks need geeks. The good news is I have learned so much about stuff I didn't want to know about in the first place. I'm a GIT. That is a Geek In Training.
Posted by Unknown on April 27, 2017
Email ThisBlogThis!Share to TwitterShare to FacebookShare to Pinterest
Labels: Krulik