No joke.  This is what my grandmother emailed me this week.


I have the story of McGrail heritage up to Harlan's marriage almost ready to take to the printer.  My English minor is bugging me about a grammar question, so I need your advice as an expert. The sentence reads "Harlan's mother's family was devout Methodist and his father's family was Quaker."  I'm trying to remember if family is considered singular or plural, and then it  would read "her family were devout Methodist and his family were Quaker. Since it is just one family, I figured it is singular and  should read family was-------.Is that right or wrong?
I had the same dilemma when writing "this couple was the fraternal grandparents of Harlan."  Is that the correct grammar?

What a great question!

Generally, this is an issue you would find in the index of grammar books under "collective nouns."  When we use words like family, couple, church, company, or other collective nouns, choosing what verb to use is not clear.

In the above example, my grandmother is correct in saying, "Harlan's family was devout Methodist and his father's family was Quaker."

Last cool thing for now.  My amazing husband got me this!  1898 grammar is better than today's? 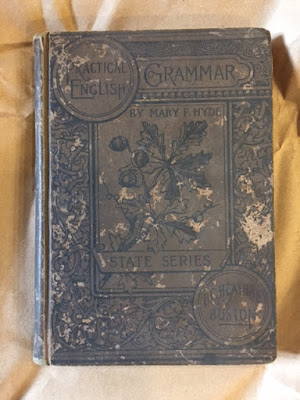 Posted by Heather McGrail on April 16, 2017
Email ThisBlogThis!Share to TwitterShare to FacebookShare to Pinterest
Labels: McGrail