"Jealousy" is an excerpt from my "Ken Kerr" story collection currently getting dusted off for a planned summer revision. Lots of dust, I tell you! "Ken Kerr" takes place in County Antrim, Ireland in the early 1700s. An Englishman becomes Lord of Irish property through marriage; and his Lady Ceara and her brother, Lord Hugh, of Ken Kerr become the flames that ever so softly, scorch.

How long did he sit there? Nine hours, or twelve? Young Mary Blevins tended to the fire and brought him soup, though Lord Tyler permitted both elements to go cold well into the night – stood in the doorway, strangely for minutes, he gathered; she watched him until he realized she was there and holding the tray. The surgeon, she beseech; we must call him to Ken Kerr.

Should I have banished Hugh instead?

There was little time to think – rage held the pistol. Yet the evidence was there, and so blatant was the crime, and so obvious and neatly planned was the strategy. Yes? He had little choice in shooting Lord Kerr in the left breast – aimed for the heart – exceeding the one claim of innocence Lord Kerr did utter; one declared claim-- or was it a whispered plea? —to his Lordship’s innocence. No; there was no denying of the indication, as plain as it all was that his sister was poisoned by a coward’s hand! Justice had to be rendered.

Clues to the betrayal were all there: Lady Ceara’s stair fall after the last meal the three had eaten together before Lord Tyler’s leave to London; a tumble down the stairway, though Lord Kerr was only two steps gain on her! And the well-nigh empty chair at the table as he, his sister, and Lord Tyler dined on ever more desolate, hushed dinners – he lost in a lively book whose pages never turned; and his failed attempts to get the young Lord alone to resolve even the thinnest of issues as the months since the wedding grew; hushed and teeth-clenched dinners when the foolish Lord was no doubt plotting his devilish tricks. And his opening and closing of his window sash no matter rime or squall – the breath from his chamber creeping cold into the hall and inconsiderate into the bones of Ken Kerr! Books. And those books! He ceased to share his books on loan – books he had always shared ever so generously before the wedding. Belfast. Yes, Belfast! He even failed to write his own sister and her husband – is own friend and like a brother -- during his ever more oft trips to Belfast.

“What friends did you in that trifling town?” he asked the hurried man.

But no response was given; not even a callous sneer. Just one glance over his shoulder as if I caught you off your guard?

‘Off to Belfast’ he would state to his sister when Lord Tyler was just in earshot. Off to Béal Feirste he would say – not another word more! – and did take with him only his coat, a flask of wine, and his pistol. In whose bed did he sleep? When he failed to return but days later? And when Lord Tyler prepared for his own leave to England, Lord Kerr stayed locked in his chamber; made no attempt to wish his once close friend a farewell; refused to open his chamber door as he so oft did and willingly before his sister’s wedding; would not give solace to Lord Tyler’s pleas to –

“Open your chamber door -- you Ass!” he demanded. And then, a finger's touch trailed against his neck.

“He suffers,” Lady Kerr whispered as she then pulled her husband’s angry arm from her brother’s chamber door; wrapped her own hands around her husband’s waist; rested her graceful smile on his heavy chest – her eyes looking up to his; bluish green emerald eyes, yet they be unusually dimmed and unpolished. “It is not his doing, we both know, to not wish you good travel.” She then pressed her head against her husband’s crossed heart. “‘A Fairy’s strike shall make youth a Sprite.’” She sighed and closed her eyes, and she sunk into his coat as if to stay there for eternity in the frigid hall of Ken Kerr outside her brother’s cursed chamber door; her warm head buried inside his coat and her breath moist and scorching as if her breath a lit match.

What did she know of her brother?

Lord Tyler kissed his wife’s forehead – a hint of her brine on his tongue -- and he regretted to pull his bride away; wished them stay for a few minutes more before he left his Ceara to her brother’s careless attention whilst he away in England. “You both love too much at times.” She whispered as she held his face in her warm, thin hands; kissed his lips one last time. “True love is to be blessed no matter how blessed true love hurts.”

What did she know of her husband?

His Ceara was so gifted to have such patience, Lord Tyler fondly recalled; and to be so enlightened. What could bring no less a blush and, in outside company, even death; was she so enlightened to the want of men? As he hurried his horse east to Ballycastle, he still felt her presence inside his coat as it warmed him even though the biting wind. She, a knowing woman; one so full of knowledge, and love.

Ever what do women know of their men?

The tempest then turned to words in a letter he penned once he reached Liverpool; words to warn his Lady Ceara’s servant, Mary Blevins, of his wife’s slight fatigue. “Mary Blevins,” he wrote; “my Ceara’s countenance is a bit too tired for such a stirring evening. Mary Blevins,” he warned; “you must not leave my new bride to her brother’s care whilst I am away.” For this Sprite of Ken Kerr!

And he warned Mary Blevins to take heed, “…especially if her countenance is to change for the worse. Thus,” he warned Mary Blevins; for if her brother, no doubt, was to steal away in the middle of the night to his wretched village of Belfast on yet another mysterious whim, “…you must let me know of his selfish wanderings,” he penned in the thickest of muddy ink; “for his selfish wanderings are suspect if his sister doth falls ill!” 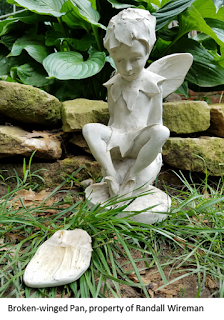 Posted by Randy Wireman on May 21, 2017
Email ThisBlogThis!Share to TwitterShare to FacebookShare to Pinterest
Labels: Wireman