Tonight, dear readers, I want to share a bit of the nonsense I found when diving into the Darby archives. I am going to share with you a random bit of version 1.0 so that you can see how far I have come. I cannot share anything from chapters 1 through 3 as they are on paper and I do not know how to import PDF into this platform. Such is the fate of all born at the dawn of the digital age.

Cries of terror and pain issued from the people gathered at the quay. Darby landed on the floor, cradling Maeta against the fall as best he could. He turned in time to see one of the women fall across the threshold, an arrow rising from her chest in a gruesome silhouette. Darby rolled to his hands and knees, scrambling over to the woman. Her eyes were wide and blood ran freely from the wound as she lay rasping shallow breaths. Darby shoved his hands under her shoulders and began to pull her inside. Maeta was at Darby’s side within moments, grasping the collar of the now crimson shirt and pulling along with Darby until the woman lay near Maeta’s fire pit.
Darby soon felt himself being shouldered out of the way, as Maeta began to tend to the woman’s wound. The arrow had struck just below the woman’s left shoulder. Darby could still see the crimson slicked tails of the steel arrowhead protruding from the skin, which meant that it hadn’t gone deep, but had most likely struck bone. The thought of it made Darby shudder as he imagined the feel of it against his own shoulder. It was only after Maeta had sidled him completely aside that he noticed that the injured woman was the one who had had the large eyed creature on her shoulder.
With a sharp tug, Maeta pulled the arrow out eliciting an agonized cry from the woman as she rolled towards the pain. Darby took hold of her other shoulder, pulling back to the ground so that Maeta could tend to the wound. She held her hands clamped over a piece of cloth that was slowly turning scarlet. Darby saw the arrow lying on the floor, the blood on its tip dulling the glint of the steel.
Pulling Darby’s hands over to replace hers, Maeta rose and then hurried to the doorway, limping slightly as she walked. Darby felt a twinge of guilt as he realized that his rash actions may have injured her. Yet, the feeling was fleeting as the growing spread of sickly warmth pulled his attention back to the wounded woman beside him.
“What do you want me to…?”
His question was left unasked. Cold slid down his spine causing his breath to catch, pebbling the skin on his arms as the hair rose on end. It wasn’t the cold of snow and ice, but more the same sensation he remembered from plunging into a river after the winter snows had begun to melt. Cold, yet clean, it lacked the bitterness that he felt during the winter months.
“Mita kol, omakiya po, omakiya po,”
The words were infused in the clear melody that Maeta sang. Darby shivered as the song seemed to fill the room radiating from Maeta’s diminutive form. The sound seemed to travel through Darby’s body resonating with echoes of the Dance with the Fèyr.
“Mita kol, omakiya po, omakiya po,”
Darby rose, his hands trembling as he watched Maeta laid her hands against the vines that formed the doorway.
“Mita kol, omakiya po, omakiya po, Hoka wicas wan le miyel.”
As the words left her lips, the vines began to grow. Pale green tendrils unfurled from the stalks that framed the door, growing outwards, clasping around one another wherever they met. Within the span of three breaths, the vines had meshed together to completely wall off the doorway having woven so tightly that not even light penetrated.
“Mita kol, omakiya po, omakiya po,”
Hok wicas wan le miyel.
Oyate kin wacin ca blihemic’iyel.”
As the last of the vines twisted into place, grating as it curled against the others, the song began to fade. Darby was left with the trembling afterglow that he had only ever felt after entering the Dance. Maeta sagged slightly as she lowered her hand from the now sealed doorway. Her limp was more exaggerated as she shuffled back towards him. She paused on the way at a small cabinet that rested near the doorway, producing a cloth roll from inside, before coming to crouch across from Darby. Within the bundle, were several needles, a spool of coarse thread, and several other items that he could not identify. 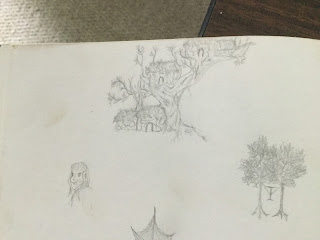