Stonehenge and the Old Man

As you may know from my ramblings, dear readers, a majority of my professional life revolves around concrete. Even when I’ve been put out to pasture as it were and no longer directly involved with such things, I am still drawn into that world. Thus, once a month, I and my colleagues Proctor a test that certifies individuals to properly test concrete. Not the life changing science I intended when I went to college, but it pays well. 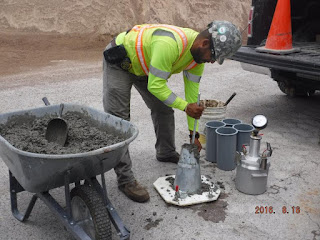 We do have fun despite the ungodly early hour that we begin. Two weekends ago the following conversation (more or less) occurred as the last supplicant wound through his testing.

Chris (scribbling on the sign in sheet): I can never remember my number.

Me: How do you not know that by now? You’ve been at this for over a year now.

Josh (pushing a broom past my station, sloshing leftover concrete towards the door): It’s easy for you. Isn’t your number like 0000000004?

Josh: I mean, didn’t you and Grysinger invent these tests?

Me: (suddenly remembering the supplicant) ...now, what did you forget? Yes, the funnel. Now, what do you do next?

Chris: Yeah, grandpa. You know, back in the Stone Age?

Me: Denisovan. If you’re going to make fun of my age, get it right. I didn’t invent these tests...now how long are we going to wait...I was just one of the first to take them. And my number is 00000025, for your information.

Jamie: (stacking chairs and smirking) What was testing like back then, old timer?

Me: Well, those were simpler times. Concrete was kinda new and the old timers still preferred mud. But hey, we used it to build Stonehenge! 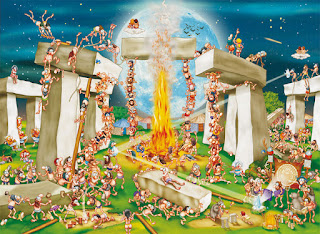 Jamie: What was the slump on that mortar you used on those “henges”.

Me (pausing to consider where to take this): Well, you know, we had two plants going and our plant was fine. It was that south plant, though. Ugh, they couldn’t get the slump within half a cubit of spec.

It was those Druids, man. There they were drawing their circles and crap in the sand trying to figure out what they did wrong while the rest of us were trying to build the damn thing. I can’t prove it, but I swear they were over there smoking mistletoe the whole time. I’m just saying that their stones were the ones that fell down, not ours.

Supplicant: Did I pass?

Me: What? Oh yeah, you. Yes, you passed. (Scribbles name on sheet) Take this upstairs and you’re done.

[All work at cleaning up the remaining mess]

Jamie: And just what did You all do when you finished building Stonehenge?

Me: Well, now, we had a big ol’ bonfire right there in the middle of the thing. We sacrificed a couple of sheep and some goats ( creepy eyed bastards that they are) and a couple of virgins. You know, typical stuff. 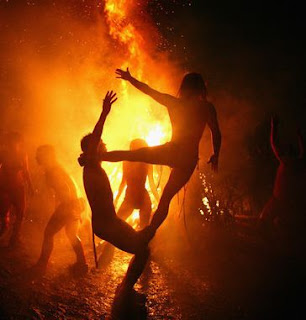 Me: Well, when I say virgins, I mean “virgins” (dramatic air quotes). They were harder to find back then, you know. And it was all fun and games until those crazy Druids broke out the mistletoe and started passing it around.

Me: Heh. All I know is I woke up on top of the altar with a goat lying next me wearing my tunic!

Me: Amen, brother. Somewhere out there there’s a satyr with my last name calling me “Daaaaaaaaady” 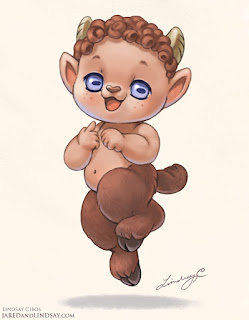 And that dear readers is how we keep our sanity in the world of concrete. The above conversation may be embellished a trifle, but the gist of it remains true. Tune in next time when I take the above dialogue and turn it into the first act of a Greco-Roman play.