Loose stone rasped beneath Surien’s boots as he walked the narrow path that led from the Settlement to the Raven’s Circle. Glancing up, he caught sight of a narrow black form winging its away to the west. He growled softly, grinding his teeth at being watched so blatantly. Had he believed that the dragon was alone, he would have sent every whorri left to him after it. Luck never favored him that way, though. Likely, there was a full Flight lurking within the clouds or just beyond sight in the mountains. 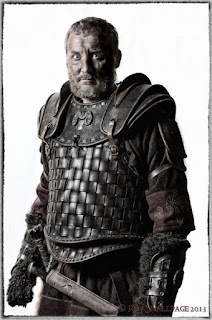 Turning back to the path, he walked on. Lights began to glow within the windows of the houses that he passed as twilight deepened. The dwellings became fewer and fewer as he walked until, as twilight deepened into night, he was alone on the path. The mat of grey clouds had begun to tear, shredding into drifting threads in the evening breeze.  His eyes adjusted quickly, gleaning the pale near - light of Morobe’s slender crescent. The only sound other than his boots on the path was that of the creaking leather and clinking scales of his armor. His broad hand rested lightly on the pommel of the metal tipped goad sheathed at his belt. The red short cape attached beneath his gorget drifted with the breeze casting shifting shadows on the ground. Sweat and rain cooled against his skin setting a chill within him as the heat of the day faded. The chain mail at the back of his padded helm caught at his matted hair, but he ignored the discomfort intent on the path ahead. 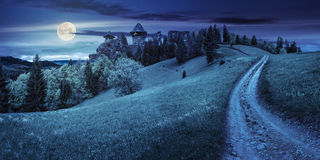 The path descended from the Settlement towards a cleft in the rock of the hills. Sheer walls of dark stone rose steeply on either side with only the twisted and stunted form of scrub trees clinging desperately to small cracks in the stone face as relief. Boulders and rocks lay strewn across the path tumbled down from the heights over the centuries since his people had been banished to this place. He picked his way past each of the falls placing his feet deftly in footfalls he knew to be safe. Ethereal fingers of fog crept up from the ground in sinuous threads as the night deepened further obscuring the line of the path. Surien did not slow, but merely continued his determined pace down the receding slope.
Here in the deepening night alone with nothing other than his own thoughts to distract him, he could sense its presence. The dark shadowed other which had become part of his being so many years ago. A gift…a reward bestowed to him by the Raven’s Circle for surviving the Selection. He alone of thirty had survived the trials to be selected as Master of the Bloodbourne. Those that wore the red called him Master and bowed deference just as he had done for his predecessor these twenty years prior.
The shadowed presence was just that – an apparition - never corporeal, but as much a part of him as his true shadow. Though truly, it seemed more akin to his soul. It lived though he knew it never drew a breath. It was aware. Its thoughts filtered into his own wrapping its sentience in with his own until it had become, after all these years, an extension of his own existence. It had power as well. Through this grafted existence, he was able to control the Hellkites. The influence and control that he was able to exert on the creatures and their handlers flowed from this other. He knew with certainty, though, that this was only the smallest portion of what lay within that presence. He could feel the storms of potential roiling within whenever he drew upon it to exert his control. It was there seemingly just behind him as always. Cold, powerful and as much a part of him as each breath he took.
The rattling of stone rolling against stone brought Surien’s thoughts away from the darkness that had been given to his soul. Hellkites, three on either side, rose from their posts in the rock. Mauls, bred from the wolf stock that had been found in these mountains when his people had first been banished here. Fangs twice as long as those of an ordinary wolf with large instep claws that could rend a creature twice its size in moments. They had been mindless slavering wretches when he had first taken up the goad. Yet, he had managed to breed intelligence back into them by pairing them with captured wolf stock from the Odonae. In twenty years, he had managed to take a mindless species and turn it into a creature which no longer needed handlers or breeders to control it. They were given direction just as any human would be and they heeded it. 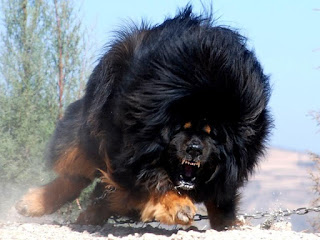 Surien raised his hand towards the nearest to his left. It was larger than the others with a coat nearly darker than the stone on which it rested. Even to his sight, the Maul was nearly undetectable save for the two golden eyes peering at him from the deepening night.
“Tarring siar, Rend.” Surien growled.
The creature blinked languidly, and then lowered itself into a resting pose. A breath later the scrape of claws against stone came to his ears as the others settled back to their stoic watch. Surien grinned slightly, allowing himself this small measure of satisfaction. His sentries paid no further heed to him as he passed between them.
Fifteen more steps brought him to the end of the path. Torches ensconced in iron brackets affixed to two stone obelisks on either side of the path guttered fitful light. Surien squinted at the brightness, stopping for a moment to let his eyes readjust.
“Weakness,” he grumbled still squinting at the torches.
The pale and weathered stone of the obelisks stood nearly twice his height. Hewn from something other than that of the mountains, they stood at the entrance to the Conclave – the gathering place for the Raven’s Circle. Each pillar had the image of a raven chiseled into it. Ancient glyphs trailed beneath each bird, but they had become so worn over time that they were no longer legible. Still, it did not matter. He had been taught the phrases long ago and could recite them now even were he overcome with senility.
He turned to the left pillar and spoke, “What lies without.”
Turning to his right, he canted, “What lies within.”