Cats in the Cradle

Tonight, dear reader, I would like to relate to you a story of cats. You may read this story and think that perhaps I have over reacted a bit in the telling and that really there was not much to it in the end. However, I would beg the reader’s indulgence in remembering that I write fantasy novels by and large and as such have a rampant imagination. It is with that in mind that I ask that you to bear with me as I tell this tale.

It was on an early spring day last year about mid-March when I found myself at a lonely farmstead in southeastern Indiana. For those of you unfamiliar with the area, it is a landscape of steep hills and broad ravines. Springs are abundant there, welling up from fissures in the bedrock which is ever near the surface. Pasture land falls off readily to wooded streams that meander through the lowlands making their way eventually to Salt Creek. This particular property adhered to this bucolic archetype with rolling hills and a stream bending its oxbow through the lowest part of the land. It was my job to identify and delineate any and all wetlands on the site. I’ll not bore you with the details of my job, but suffice it to say that I finished right as the day was ending. 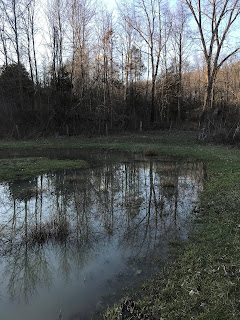 Trudging up the last hill on my way back to my truck, I paused to watch the sun dip below the tree line. Well, truth be told, I stopped because the wheezing of my breath had become louder than the squelching of my boots in the mud and the thought of passing out on that lonely hillside did not appeal to me. The chill wind that had harried me for most of the day faded away leaving only the song of early migratory birds ringing through the trees. I pulled down the hood of my sweatshirt and heard the lowing of the cattle in a distant pasture as the sky faded from rosy gold to pale yellow. 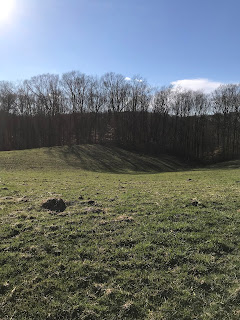 Once my breathing had settled from "Danger, Will Robinson, Danger!" to something akin to normal, I resumed my trek back to the truck. I had parked on a gravel road that led back to the hill above the oxbow facing towards the farmhouse and the silos. This road forked just before reaching the house with the wider lane going left between the house and the silos and barn. The other was narrow and ran behind the house to the right towards the road. I slumped into the cab, grimacing as my muscles protested every move I made. The tires crunched against the gravel as I pulled forward meaning to go through the wider left lane.

The farmhouse was small with white clapboard siding and green shutters at the windows much like most houses in the area that were part of working farms. It was obvious that no one was home, which I took no account of as most farmers have to supplement their work with second jobs. I rolled slowly past the fork in the road and up the gradual slope towards the house. The metal silos were just to the left  of me hiding the majority of the barn which was set back a bit. I could see the the barn doors were open, but again I thought nothing of it as this was not uncommon in the area.

It was then that I saw the cat.

There at the top of the rise came a small grey cat. It was little more than a kitten, really. It walked slowly out to the middle of the road and sat, curling its tail about its legs. What I remember most now is the yellow eyes. They were such a bright contrast to the smoke grey fur that you could not help but be drawn to them. 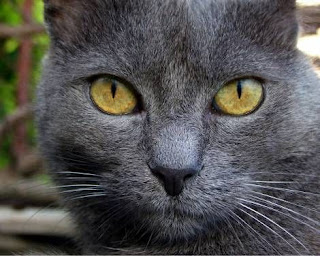 I pulled forward a few more feet, but the cat showed no sign of moving. It merely sat there regarding me with an aloofness that only a cat can manage. I beeped the horn, but received even less reaction.

"Well, this won't do," I said as I put the truck in park and opened the door.

It was well into the gloaming of the day at this point, but there was enough light for me to see my surroundings. I walked forward towards my little grey friend making shooing noises in my best non threatening voice. The cat, of course, made no movement other than to settle down into a resting position. It blinked languidly at me as I drew near.

It was then that two other cats wandered into to my view from the house.

"Oh, more of you," I said watching a ragged black and white tom and a less ragged calico pad their way towards me.

At this point, my imagination took over with enthusiasm.

You know....this is the point in the story where things go bad.

"And I just got out of the truck..." I murmured to myself.

I turned to go back with the plot of every horror movie and book I had ever read or seen tumbling chaotically in my head. Bram Stoker's Dracula won out narrowly over Stephen King's Cujo leaving me with the thought of demonic cats stealing my breath and/or soul like the old folks used to claim. 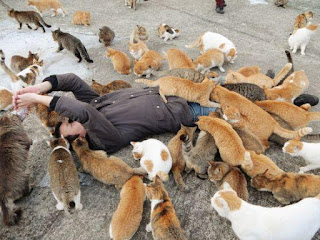 I had gotten three steps into my strategic retreat when I stopped. The barn was in full view now. Both doors had been left open revealing the John Deere green of the machines inside. It was the cats that made me stop.

"What the hell?" I exclaimed.

I watched as dozens of cats in all shapes and sizes streamed from the open doors. Now, had it not been going onto dark and had I not been exhausted from slopping around in the mud all day, I might have welcomed the herd of cats trotting their way towards me. However, as it was, I was left with the overwhelming desire to leave. It was only when I felt the touch of the black and white tom against my leg that I bolted for the truck. 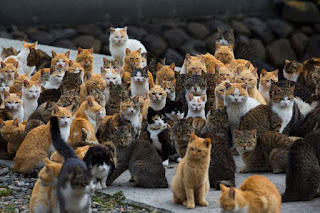 I backed up to the fork in such a rush that I nearly slid into the field. Turning hard, I aimed the truck towards the other lane behind the house. The dash alarm chimed to remind me to put on my seat belt, but I ignored it.

"Yes dear, I hear you," I said to the truck. "But I would rather not have my soul sucked out at the moment, thanks."

It was only when I was out on the main road that I stopped to buckle up. I paused, though, as I was reaching for my seat belt to look into the bed of the truck.

As I was driving away, I looked over to the drive between the house and the barn and found the little grey cat still perched at the top of the rise staring at me with those bright yellow eyes. 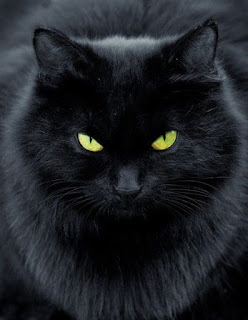