I went to my digital files to find a scene from my novel that exemplifies my take on the romantic side of story telling. However, it would seem that all of those portions of the novel are on paper. (Paper? Seriously, who uses that anymore?) The scene I'm presenting was written ages ago and I am transcribing it from one of my many notebooks. As I've said before, I've been working on this story for a very long time.


"Darby sank, slowly settling into the muck at the bottom of the ditch until only his feet and head were left above dark water. Mud coated his face making it impossible to see, but Gwen's laughter was perfectly clear. Heat bloomed in his cheeks and flared about his ears as the mirth echoed in his ears. He struggled to rise, swiping roughly at the mud over his eyes. The mire pulled at him making the effort awkward as he struggled to find his footing. He managed - with a great flailing of water and rank smelling mud - to rise to full height. The bank of the ditch was little more than a few steps away, but when he moved towards it, his foot caught on a submerged root causing him to fall forward back into the waters.

He heard Gwen stifle her another bout of laughter. His face felt like fire and he was certain that beneath the mud, his face was the color of heated metal. He knelt there hands planted into the fetid mire while ripples of his slogging efforts lapped tannic waters against his body. With dogged purpose, Darby turned and crawled his way back to the near bank. hauling himself out, he sat with an unceremonious squelch among the nettles and reeds.

Another swipe at his eyes and his vision began to clear. He looked up and saw Gwen standing above him, holding out her hand. Her clothes were torn and stained. Long red scratches marred her face and hands with more than one beaded with blood. Twigs and bits of bramble were caught up in her dark hair, teasing random strands away from the confines of the braid. He smiled slightly at the sight of a single leaf falling away from its entrapment near her temple. And there, sitting amongst the weeds, he caught her gaze. Pale green eyes with flecks of brown held his. Insects chirruped and frogs called out into the gloaming of the day as Darby paused.

Taking her hand in his, he rose awkwardly. Covered in mud and most probably looking like a primordial creature from a time before reckoning, he stood before her and smiled."


There is more to this scene, of course, but I think I'll leave it there. I suppose it's a bit tame by modern standards, but that's not such a bad thing really. 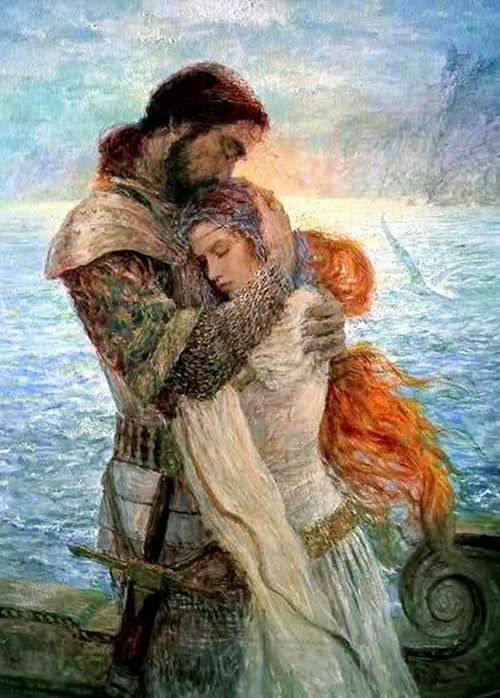