I have had an incredibly stressful week at work and realized that I haven't the energy or brain-wake needed to jot a clever or interesting post. I've had to stay late at my job, slaving away in the laboratory, with very little sleep. Even now, I’m seeing double! Anyway, you can bet I'll be energized the next round, because I'm getting closer to a vacation in Florida, and I'll be well on it long before I actually go. In the meantime, I wanted to share with you some fabulous ideas for stories that I came up with while sitting at my lab bench during the long and frequent incubation periods and time point readings of a rather tedious assay. Now, some of these are just jots, so I hope you don’t mind the rawness. Just the same, these are all mine as in TM and © and ® and all that stuff, so please be kind and let me have them all to myself to craft (please). Let’s see…let me find where the list is… I think I wrote it on the back of one of my chart readings… Got it!

Okay. I’m really into ghosts. I am crazy about them, in fact, I thought it would be cool to try my hand at an old-fashioned ghost story. Ah, but I figured today’s readers would probably not want to read about haunted Victorian houses or specters haunting old scrooges, so I thought – and rather cleverly, I think -- why not write about an iron-pumping ghost haunting an L.A. Fitness facility? Neat, huh?! I was thinking I’ll have him fall in love with a gorgeous Millennial that comes in regularly for a swim. The tension comes when he realizes that she simply doesn't want to have anything to do with a bodybuilders, or ghosts. My anticipated title will be Paranormal Weight Loss, and the story will center on how the ghost tries to win the young lady’s heart amid all the turmoil of dating, and the whole ‘I’m dead’ thing and ‘Umm…you disappeared again.’ And ‘Oh; sorry. I just faded into the steam from the steam room’ drama. It’s a romance, obviously, and… You know what? I really like this idea the more I think about it! Wish I had the energy to write some more on this tonight, but I really need to get some shuteye. Let me tell you about the other ideas I had at the bench.

Did I tell you that I had only, like, 16 hours of sleep since Monday? Can you imagine having to spend an entire twelve hours in a lab, working with 200 proof ethanol and harsh organics like DMSO? I know, right? Back to my list.

Another great idea deals with a gay couple who are practically strangers in their relationship after years of so-so. Ah! Until something magical happens in their bedroom! Let me explain – and tell me if this is obvious or has been done before -- but in the middle the couple’s bedroom, a spiraling staircase suddenly appears. Neat, huh? The staircase is apparently made of a thick red wood and it’s polished brilliantly and looks like a million bucks, and all that. But the strange part about all this is (and here it goes!): the staircase ends at the floor and at the ceiling; but goes nowhere! Well, I mean it goes somewhere, but it looks like it just ends in the room. And then… Just a second. I must have spilled some bromo-blue protein stain dye on my list. Dang. It looks like I just stopped there. Really? I thought I had a half dozen ideas written out on this sheet. Anyway, I think I remember how the plot goes. The staircase is put there to represent their indecisiveness in their relationship. Or something like that. Sorry Forgers, but my line of thinking on this is probably hidden under the stain. I do remember that Darren, one of the gay guys; well, he tries to ignore the fact that there is a huge spiral staircase in the room. Won’t even mention it to his lover, Rick, and wants to see how long Rick goes without noticing it there. Rick, on the other hand, thinks Darren placed the staircase in the room to, uh…I think Rick thinks Darren placed it there to...just to piss him off. Yeah, that was it. Anyway, Rick just blows up one morning and says to Darren, “Well?! Why can’t you just hang these shirts in the closet, like normal people do, instead of the doorknob?! Look here! I can’t even turn the knob because these hangers are so heavy. Guess you don’t want me to go to work to help make our house payments.”

And Darren just turned over in the bed and said, “Yeah. Like you don’t wear those same shirts.”

Obviously, this is a murder/mystery. Or was it romance? Or, did that actually happen in my life? Doesn't matter. Oh! I think the staircase had special powers, too. Pretty sure it talked in Cockney rhymes and sung the boys to sleep. Um, you know what Forgers? I really need to hit the hay. I've had this headache ever since leaving the lab today, and I’m feeling a little loopy. Amazing I can write so clearly! How about I post more on these story ideas at a later date? Any suggestions on them would be greatly appreciated!

Dang it. I just recalled that the gay couple and the Cockney rhyming spiral staircase idea was originally Mike’s! So sorry, Mr. Moir. By all means, go with it. 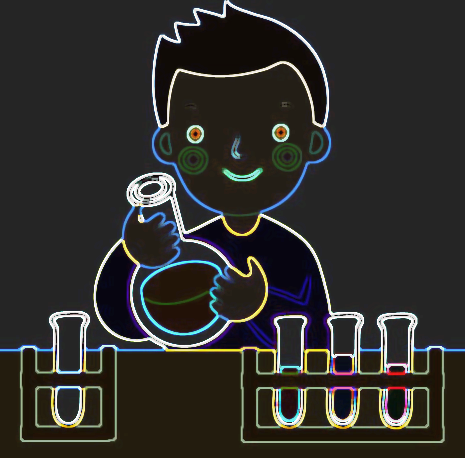 Posted by Randy Wireman on July 17, 2014
Email ThisBlogThis!Share to TwitterShare to FacebookShare to Pinterest
Labels: Wireman