The worst and most troublesome prostitute in the 'hood!

September 28th, 1888 in Kingsland, Dorset (England), Elizabeth Hudson met her reputation in the worst way. While perusing my usual historical sites, I discovered a news clipping that described Ms. Hudson’s unfortunate altercation with a pale complexioned American by the name of James Johnson, and how her feathery friend, Alice, (everyone has a friend Alice) came to her rescue, of sorts. I present to you the report below, interspersed with my comments of course:

29 September 1888
THE WHITECHAPEL MURDERS
At Dalston Police Court yesterday, James Johnson, aged 35, a well set, pale complexioned, and clean shaven man, with a strong American accent, residing at 18 Birdhurst Road, Wandsworth, Waites, was charged with assaulting Elizabeth Hudson by throwing her down on the pavement and threatening to stab her in Richmond Road, Kingsland.

Pale complexioned? Occurring in England, I’m guessing this was like saying he looked like us. I wonder, though, if ‘clean shaven’ meant ‘with beard, but trimmed nicely’? I am also struck by the ‘strong American accent’ detail, in that it’s not very detailed at all. Was Johnson Bostonian? Texan? Chicagoan? New Orleanais? Whatever he was, he had a strong one!

The Prosecutrix, who described – Wait. I’ve not seen this word usage before. Have you? It’s even hard to say! Sorry…back to the report.

The Prosecutrix who described her self as an unfortunate, said the prisoner met her at two o'clock yesterday morning as she was going home, threw her to the ground, and then produced a long knife and attempted to stab her. Her cries attracted the attention of the police, who arrested Johnson as he was running away.

The prosecutrix said the knife was eight or ten inches long.

Wow! But Johnson could not cut her? This is a little fishy. I doubt anyone strong enough to throw down a woman and wielding a ten inch knife could fail to cut and slash, even his own self! Yet the most interesting part of this odd case has yet to come. I introduce to you Alice Anderson: Feather Curler.

Alice Anderson, feather curler, (See? I told you!) who resides with Elizabeth Hudson, and is her friend, complained of having been attacked in a similar manner by the prisoner the same morning.

Feather curler? I looked it up on a Victorian research site. Occupation feather curler confirmed.

I find this Alice and Elizabeth relationship to be most interesting. Was Alice just sticking up for her friend and pretended to be assaulted, too? Or did she and Elizabeth have a racket of some sort? Or was Mr. Johnson really a burgeoning Ripper? Well, he couldn’t be a Ripper. Why? Apparently, because his knife could not be found.

The police failed to find the knife referred to.

Well, I know the English courts would need the evidence. All courts need evidence. But, honestly, as it seems to be written, I have difficult time seeing missing evidence (as opposed to no evidence) as proof that something did not happen. Um…What did I just say?

The prisoner denied the allegations of the witnesses for the prosecution, and said they accosted him.

Oh my! Then Elizabeth and Alice do have a racket. Brilliant! From a writer’s point of view, this relationship is one to remember for future characters and scenarios. Eddie and Patsy, anyone?  Laurel and Hardy, anyone?

Okay. Maybe the "Feather Curler and Unfortunate Duo" aren't so rich beyond the obvious, but it definitely brings a grin. Back to the case. Why believe Johnson’s story at all? He may still be a psycho going around pushing down prostitutes and exposing his shiny, ten inch knife. Remember, this is Victorian England, 1888, the Year of Jack. Unlike now, they still had prostitutes, thugs and rackets, and psychos running around their streets and hoods. Let’s not judge. Honestly, at this point, Racket or Ripper; they are both plausible scenarios. Elizabeth and Alice were partners in crime, or James was a nut. Whom to believe? James, of course. Again, why? Because James was a clean shaven guy:

Johnson was proved to be a very respectable man, while, on the other hand, the police said the prosecutrix was the worst and most troublesome prostitute in the neighbourhood. (emphasis is mine).

While I do sense some of the usual, historically confirmed chauvinism among the Victorians (or raw, classicist snobbery?), I admit laughing out loud when I read that line! Elizabeth Hudson was not only the worst prostitute in Kingsland…but Elizabeth Hudson was also the most troublesome prostitute in the 'hood…!
If you were, um, an escort in this day and age, could you imagine having that review on your dot com comments section? Man… Imagine what that would do to business!

Other evidence having been given, (so) the Magistrate discharged Johnson, remarking that he had got himself into a very awkward scrape.

Yes, Mr. Johnson. A very awkward scrape, indeed. I wonder… Did our James stay in England? Or did he return to Strong Accent, America, or wherever pale complexioned, clean shaven Americans come from? Did our Alice stick with her feathers? And, did our Elizabeth improve on her enterprising reputation?

I love the Victorians!

You can find the newspaper clipping of Ms. Hudson’s affair here on the Ripper research site JTRforums: http://jtrforums.com/showthread.php?t=18418


The Victorian occupation site (feather curler) is cool, too. You can research here: www.census1891.com 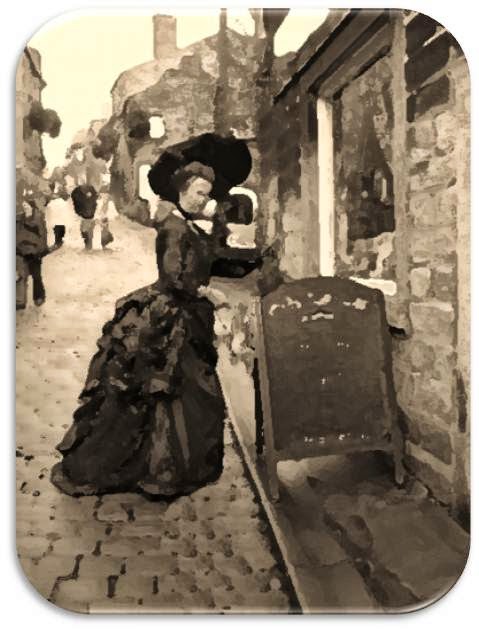 Posted by Randy Wireman on August 28, 2014
Email ThisBlogThis!Share to TwitterShare to FacebookShare to Pinterest
Labels: Wireman