Recently, I was reading an interview with Brandon Sanderson. He is an author in my end of the pool and a rather good one at that. If you don't know of him, then I suggest you Google his name and about a thousand listings will come up (995 more than if you Google my name). Anyway, one of the questions posed to him was about how he depicts magic in his series. This was his answer:

"It was definitely inspired by my time outdoors, but at the same time, great magic in a book will often be one that has a strong tactile sense to it. Some newer writers go wrong in their magic in fantasy books by making it cerebral. Giving that extra boost, where you make it easier to see yourself doing it, makes for a stronger story." - On the Red Couch with Fantasy Novelist Brandon Sanderson (Inside Flipboard - December 2014)

It's that last bit that got the grey matter twitching for me. Making it easier for you (and thereby the reader) to see yourself doing it. Think about it. If your hook is aesthetic and abstract, then it is so much harder to make that all so vital connection with the reader. This is true for all genres of fiction, but I will focus on fantasy simply because it is near and dear to my heart.

So, let's consider some examples. Take our dear friend Mr. Potter. The reader is already enamored of the character from the beginning. How could you not be? An orphan who is forced to live in a cupboard under stairs by odious and cruel relatives can't help but pull at the heartstrings of all but the Grinchiest of people. But then, there is the magic. Simple in concept and easily mimicked by millions of children and children at heart. All you need is a stick and some broken Latin phrases and you can so easily put yourself in Harry or Hermione's place. That connection is easy for the reader to make and thus makes a strong bond between them and the characters.

Tolkein. You can't talk fantasy without bringing him up eventually. Now, there really wasn't much actually wizardry in any of the novels. The odd bit now and then from Gandalf or an elf or two, but page for page not really all that much. The connection there is in the magical beings that abound in his world by the metric buttload. Elves, Dwarves, and Hobbits are all basically variants of the human form. It takes little for a fan to imagine oneself as any of these and therein lies the deep and abiding connection. Rather like the Ring, itself, which is another tactile and easily imagined magic.

Now, as to the other side of the coin, I would point to authors who try to explain it all. I won't name specific authors or series as I consider that bad form. However, say your premise requires the protagonist to drop into a trance like state, acquire his power from an ethereal place within, and then somehow project that outward from said nebulous inner sanctum. Difficult to write, to say the least. This premise is needlessly complicated and leaves most readers confused as what is going on in the scene. This is why I had to...*cough*...I mean...it would have to be changed to something simpler. A premise that most any reader could visualize and more importantly, imagine themselves doing. 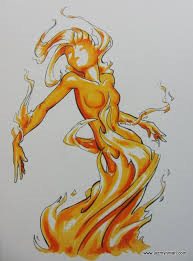