Scribbling On The Walls

As I have mentioned before, 2014 was the year of the "Great Migration" for my family from the urban confines to the wider spaces of outer suburbia. We planned for this for months (years, actually) to the point that I'm certain all of our friends and family were exhausted from hearing us talk about it. We were so consumed with it all that trolling through real estate sites became an all consuming addiction. And all through this, I had one recurring daydream. The new house would have a room that was just for me. A room where I could write.

I had it all planned out. It would have high ceilings and hardwood floors. I wanted a window that looked out into a wooded area, but only the one, as anything more would be to great a distraction. I was going to put my roll top desk near the window and my grandfather clock in the far corner. I have this typing chair that was my great Aunt's (circa 1950) that I would use, even though it isn't the most comfortable. The walls would be painted the color of aged parchment (Where I was going to get that color paint, I have no idea), but be completely devoid of wall hangings or other obstructions. Why? Well, I'm glad you asked. 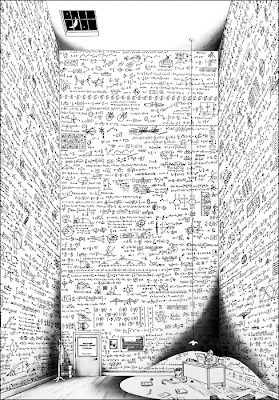 You see, I've this problem with plotting my story. It doesn't fit on standard 8x11 sheets of paper. I've tried plotting it out line by line, but I find moving to a different page disconcerting. I tried using butcher's paper and banner stock, but that 's hard to store and the cats tend to shred the paper or curl up inside it. I wanted clear walls so that I could write on them. Draw out my plot lines and my character notes all across them and have them in front of me at all times while I was writing. Yeah, it's a bit over the top and probably a little bit off, but then, that's me. Dream big because...well, why the hell not? But, here's the thing. Even if I had it, I'm not sure I would use it. Alone, in a room, with only my thoughts and the vast expanse of empty walls, I am fairly certain I would run mad within days. It really was a beautiful dream, but  I know myself well enough to know that I could never be sequestered in such a manner. My imagination is too wild to be put in a box, no matter how pretty it is. I guess I'm just meant to scribble my notes on random scraps of paper and scattered notebooks, which (after all) isn't such a bad thing.