I have geeked out on POV quite a bit.  Now for the new year, I'm going to geek out about building stronger characters.  It's time to pump them up.

Funny, building characters seems simple, and really, like so many things, the premise is easy.  It gets complicated so quickly.  Certainly, we can talk about getting to know characters' minds, philosophies, political meanderings, coffee preferences, and all the rest, but when we really understand a character after reading a few chapters of a great novel, the character should make sense.

And how does this work?

And like everything else in writing, every word should count: every detail should matter.  When done well, a few precise and careful details, like a few distinctive gestures in someone you just met, will tell us so much about a character.  From John Steinbeck's Of Mice and Men,

They had walked in single file down the path, and even in the open one stayed behind the other. Both were dressed in denim trousers and in denim coats with brass buttons. Both wore black, shapeless hats and both carried tight blanket rolls slung over their shoulders. The first man was small and quick, dark of face, with restless eyes and sharp, strong features. Every part of him was defined: small, strong hands, slender arms, a thin and bony nose. Behind him walked his opposite, a huge man, shapeless of face, with large, pale eyes, and wide, sloping shoulders; and he walked heavily, dragging his feet a little, the way a bear drags his paws. His arms did not swing at his sides, but hung loosely.

The first man stopped short in the clearing, and the follower nearly ran over him. He took off his hat and wiped the sweat-band with his forefinger and snapped the moisture off. His huge companion dropped his blankets and flung himself down and drank from the surface of the green pool; drank with long gulps, snorting into the water like a horse. The small man stepped nervously beside him.

“Lennie!” he said sharply. “Lennie, for God’ sakes don’t drink so much.”


Lennie continued to snort into the pool. The small man leaned over and shook him by the shoulder. “Lennie. You gonna be sick like you was last night.”

Lennie dipped his whole head under, hat and all, and then he sat up on the bank and his hat dripped down on his blue coat and ran down his back. “That’s good,” he said. “You drink some, George. You take a good big drink.” He smiled happily.

George unslung his bindle and dropped it gently on the bank. “I ain’t sure it’s good water,” he said. “Looks kinda scummy.” 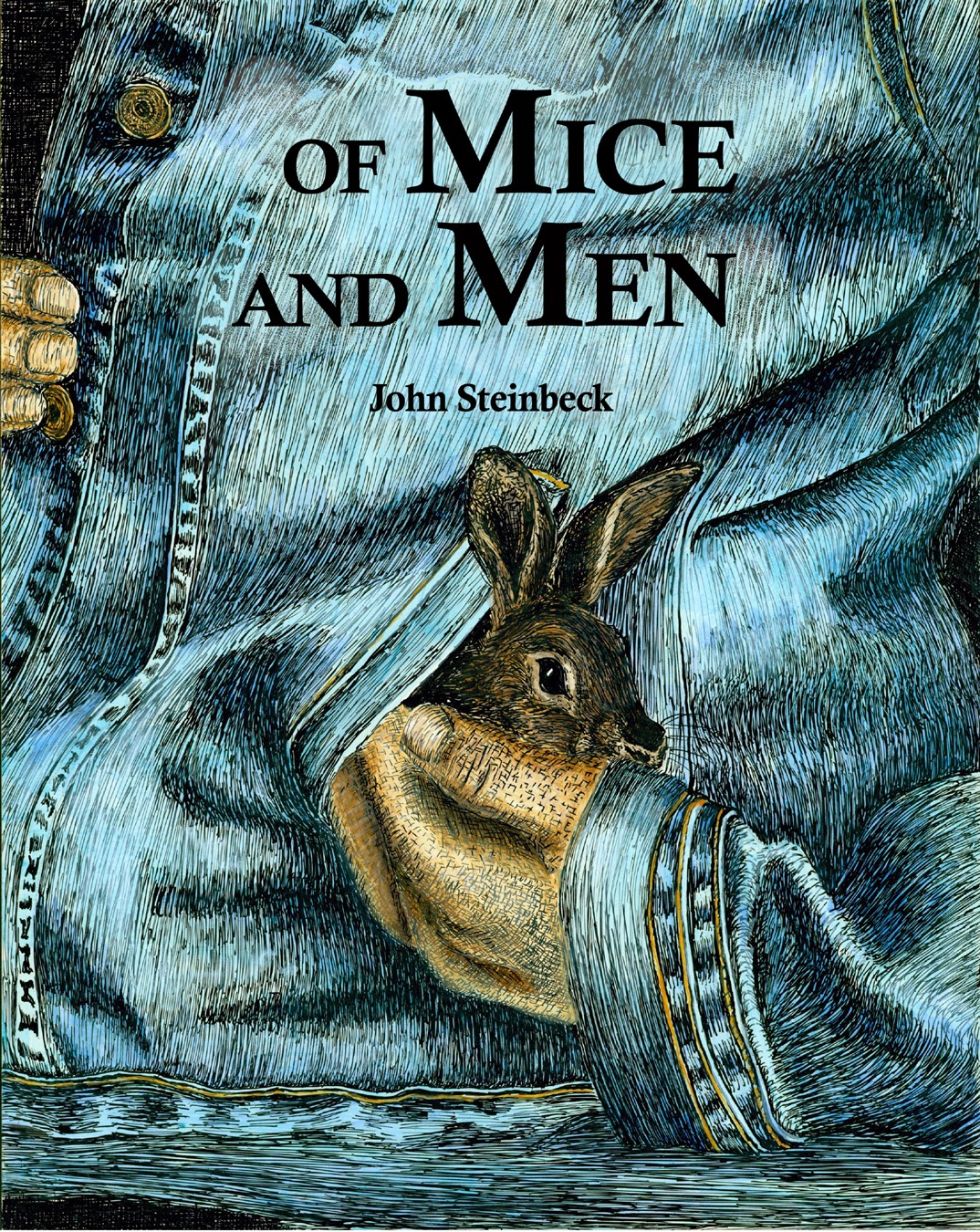 Lennie dabbled his big paw in the water and wiggled his fingers so the water arose in little splashes; rings widened across the pool to the other side and came back again. Lennie watched them go. “Look, George. Look what I done.”

George knelt beside the pool and drank from his hand with quick scoops. “Tastes all right,” he admitted. “Don’t really seem to be running, though. You never oughta drink water when it ain’t running, Lennie,” he said hopelessly. “You’d drink out of a gutter if you was thirsty.” He threw a scoop of water into his face and rubbed it about with his hand, under his chin and around the back of his neck. Then he replaced his hat, pushed himself back from the river, drew up his knees and embraced them. Lennie, who had been watching, imitated George exactly. He pushed himself back, drew up his knees, embraced them, looked over to George to see whether he had it just right. He pulled his hat down a little more over his eyes, the way George’s hat was.

Most of us have read this book before, and even this description brings up the memories of the sadness of things to come for George and Lennie.  These details are simple, sparse, and extraordinarily careful.  In reading these few paragraphs, we understand these two men better than most people we meet or know in our everyday worlds.

The simple actions, conversations, and details tell so much about these characters.  In this passage and in pretty much all of Steinbeck's work, he avoids interior thought--as is more or less definitive of many of the modern writers of his time.  He relies on actions and details to reveal the character and the story.

Of course, this is not the only way to develop character.  More methods coming soon.

Posted by Heather McGrail on January 12, 2015
Email ThisBlogThis!Share to TwitterShare to FacebookShare to Pinterest
Labels: McGrail