Here's another passage from Meg's wanderings in Korea.  Enjoy.

The rain hadn’t stopped, and Meg began to wonder if Busan could wash into the ocean.  The strange, marvelous city she hadn’t heard of three months before would be gone.
And what would anyone know of it?
She certainly hadn’t known anything about this city, important historically, culturally, and there it was.
Koreans quietly dismissed being from this city—Seoul is the only city of importance—so they sent their children to Seoul, or Japan, or the United States if they have enough money.
And Meg, as unsettled and misunderstanding as she was, she loved this place.
She put on her sneakers, still not dry in the humidity, stepped over the cavernous first step to the front door.  She needed to find out about the scratching beneath the floor.  She would ask Tom, the other teacher today.  The growing hole in the step began to haunt her.  She didn’t know what was beneath the floor.
The scratching itched at her ears at night.
She saw the beggar in the salmon-colored sweatshirt on the overpass.  He knelt, with his face down to the cold, wet ground.  His hands stretched over his head, cupped and begging.
Meg wondered why she could have been so foolish to think he could have been praying.
Of course he wasn’t praying.
Meg took out some coins and counted found two five-hundred won coins.  She dropped them in his palms.  It was about one dollar.
She kept walking across the wet bridge and felt good about doing something right.
A stout Korean woman pattered down the bridge yelling at Meg.  She didn’t understand, so she turned right on the sidewalk at the bottom of the stairs and kept walking, but a young student, wearing a uniform—the typical pleated plaid skirt and white blouse—translated for her.
“She’s talking to you,” the student said.
“I don’t understand her,” Meg said.
“She said that you can’t give money to him to buy beer—you know, soju?”
“Yes,” Meg said.  “I understand.”
She didn’t look at the woman or the student.  The praying man had become a beggar and now a drunk, in Meg’s mind.
The stout woman still yelled at Meg, and the student continued to translate.  “She says that you aren’t helping him.  He will just spend the money on beer.”
Meg nodded and walked away. 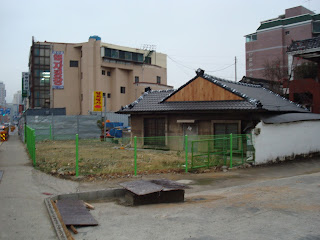 Posted by Heather McGrail on November 02, 2015
Email ThisBlogThis!Share to TwitterShare to FacebookShare to Pinterest
Labels: McGrail