Not the books, but the TV shows and specials, and the 'live' court hearings and sessions.  She’s hooked, especially now, with all the 24/7 digital drama hosted by the most creative and familiar Masters of Mayhem who have become caricatures of their own making.

True Crime hosts and actors are storytellers who turn an ordinary life into distinct importance, rendering the less-than-rich-and-famous among us to instant stardom on a bad choice made one day in our otherwise uneventful, 9-to-5 lives. From the first sugary glance between potential lovers or the machinations sparked by the scent of treasure, we go from good to bad -- sometimes over years of buildup or planning; other times, in an instant.

Then, we become predator or prey. We are fixing to right a perceived wrong, or we are about to receive the ultimate punishment. We are cashing in the life insurance, or we are downed by bullet or bloody knife. And always --never does this change -- our neighbors are being interviewed on local news exclaiming, He was always a friendly guy. She generally kept to herself. This kind of thing never happens here!

True Crime worth its luminol encourages us to wonder why Fran's ex was seen driving by her house or listen in a bit closer to the neighbors' all night screaming match. True Crime lays it all out for us to witness how the motive was conceived, what obstacles were circumvented, and all the mayhem the motive had eventually caused. True Crime gives us the power to predict an outcome, too -- with its professionally arranged ethereal background music that informs us when a lie is about to be spoken and when all hope is to be lost for good.

True Crime gives us the right to feel sympathy, to hate, and to just plain wag our finger. That poor soul should have listened to his brother! That man's wife should have checked his messages!

She likes it all, and she likes the mystery. When Pop has long fallen to La-La Land, Mom is busy collecting the evidence as it’s presented, holds her judgment as best as anyone could under the circumstances, and tries to figure out the real motive despite the cunning editing and false leads. Yet, more than anything, I think Mom likes to shake her fist and throw her taunts at “the idiot” who thought he or she was the cleverest killer of all time.

How can that be? You got caught, you Idiot!

Last week, Mom looked at me point blank and said, “I know the perfect murder watching all of my shows. Let me tell you!”

“No, I'm serious! I know how to get it done. Number one: Don’t tell anybody what you are going to do. These idiots, they never keep their big mouths shut. They always tell. Don’t do it! Don’t tell nobody nothing. Am I right? Number two: Wear three layers of clothing – not your own; somebody else’s. And gloves and whatever protection that will make it harder to shed your DNA. Just takes a little, you know. And burn the clothes. Burn everything, and make sure it is all burned to ashes –all of it. Those idiots always leave something behind. Don’t leave the scene unless you know for sure.”

“Okay. What’s number three? By the way, I think this conversation is incredibly disturb–“

“--Number three: Don’t kill by an instrument- poison is best. Never cut into the body. Blood leaves all kinds of traces – even just a spot. And for God's sake, don’t cut up the body into little pieces. Can you imagine how hard it would be to not leave any pieces behind? You’ve just made your chances of disposing it all a hundred times harder.”

“Oh. I’d wrap it up in someone else’s sheet, toss it in the car, and dump it far into the woods – for miles and miles – so the body rots. A deep hole would be best, and the deepest hole you can dig. And it can’t be in a woods near where you committed the murder. Farther away from the crime scene, the better.”

And – always make sure you cover your alibi. Go into a crowd, or where someone sees you go in, but can't see you leave. Make sure someone remembers you – talk to someone or make conversation. And it’s important that you return to that same scene after you have disposed of the body, and sneak back in -- unnoticed.”

“So, you don’t think you would somehow slip up and tell Papa?”

Murder, I tell ya! 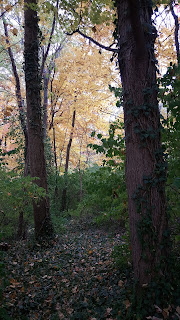 Posted by Randy Wireman on November 05, 2015
Email ThisBlogThis!Share to TwitterShare to FacebookShare to Pinterest
Labels: Wireman