A New Year That Must Never Come!

The frigid sea lapped at their feet, yet the imagined sting might as well have been laid upon by clover, for the men’s laughter echoed above the surf as they entered the sea cavern. Her salt-pricked eyes had followed them down the deep escarpment to the abandoned manor, Ken Bane, and made worse her fear of what their shared path now took them. She trembled as she waited; only then realized the basket of meat bones and scraps she was gathering from the culinary still dangled from her arm; its oily rot a fetid embrace in the confusing gusts mounting the cliff she now perched. And where she now shivered. She had rushed from her duties to follow them; she had no time to think as she saw the men run past her window and wearing nothing but spring coats in a midwinter's icy clasp. No good could come of this.

Mary wrapped her coat tighter around her neck, anticipated the men’s exit from the cavern. What jest betwixt was unimaginable; yet she perked up as the men then stumbled out of the hollow, laughing and pushing each other from one stone to another. She thought to call them out. To scold them back to Ken Kerr. To shame their souls, to…. Only, the men disappeared into the hollow’s stony yawn once again in chase of only themselves. Three gulls did suddenly dart and squawk from out of the hollow’s other side annoyed, no doubt, at the Adam intruders. At the English Invader. The brilliant white birds flew high up to the cliff’s face and circled on the updraft, and then –as if by the hand of God – cast down towards the once majestic Ken Bane, disappearing behind its moss-blotched embankment.
Mary withdrew into her curses, tasted sea brine through her nose. She stepped further against the ugly scene before her. Neared to the cliff’s edge. Scrutinized the hollow’s gape. She clutched at her coat in the snarling gust, her fist tightened to stone, and listened for the laughter of foolish men to spill from the hollow’s guilt. Imagined their jest and winced in pain as the brine sliced down her throat. No good could come of it.

No good could come from such a friendship. With such as man as Tyler! How that man could cast such a spell on her Lordship defied all moral standing...all logical paths. What it would take to unravel such a knot twisting before her very eyes by that man…that foolish man…that Englishman, Lord Tyler?

Mary Blevins had no doubt a correction was afoot – in time...in time. In her prayers, she would ask for it; for she was a good Christian woman. True, as fact, such thoughts consumed her during her chores, during her sleep. It must cease. How; it did not matter… It will be duty to her country, duty to her true Lordship. She will watch their every move…will guess the Englishman’s every thought… She will weigh upon that man’s every movement in Ken Kerr like a God be-damned stone!
Duty is duty. The household of Ken Kerr must be cleansed for the new year. Consumed.

Mary nodded to God. To country, she conveyed her pledge. She stepped closer to the cliff’s brink where a sinewy raspberry hedge clawed with its dead thorns. Over the edge, over the gray swells and the white crashing against the shore; she anticipated her many duties in the days ahead.

Just inside the hollow’s gape, she spotted shadows darting to and thro; growing and shrinking and growing tall and thin once again.  “No! England Rob…” She heard above the surf the echo from the cavern. “Ha! Put it down, you trog!” She heard laugh her Lordship, Hugh Kerr; laugh the child she helped to raise; laugh the child if from a man’s lungs. Mary watched as her Lordship was now chased by the Englishman from out of the hollow and up the trail to miserable Ken Bane. This gaiety…this frolicking about… What good could come from this jest? This laughter of innocence. Threatened the very foundations of Ken Kerr. Shredded her insides; the knives of sin. Damned them and Ken Kerr. Pricked and clawed. Her hand and coat pricked and clawed and caught within the dead thorns of last summer! How she hated the Englishman then, if she knew him but for only two weeks. How he stole the sun from every window; stilled the music and numbed the taste of every gathering and feast. One by one and day by day, her Lordship and his lovely sister cared not to fill their manor with old and dear and true friends – and thought less of invitations to her own son and family. She witnessed the light disappearing over time; felt the joy seep from out of the rooms as her Lordship and Ladyship cared only to fill their lives with the one handsome, yet selfish Englishman, Lord Tyler!

What good could come of this? Mary clenched her teeth; a grind that sent a pain through her jaw. She knew to quell words and to bare no witness, but she failed to keep herself from calling out to the frolicking things. "You must stop this at once!" She screamed into the wall of the wind. Yet, she knew the couple never once looked up from their jest; nor turned an ear from the other; nor saw the moment as anything but time stilled for them.

They laughed and chased and embraced and jest as if they were not wallowing in the thorns of their sins. Careless. Careless, childish things!

The wind punished her with more of her once sweet Lordship's laughter. “England Rob!" He roared with laughter and caught his chest in his hands. "England Rob! You mustn’t catch me. Ha! You old man, my England Rob!”

As if on command, the gulls returned to the cavern, entered where the men had vanished. Mary heard the gulls cry out, imagined them a scolding. Mary scrutinized the hollow; failed to see their shadows. Mary listened above the surf; heard nothing of their laughter. Mary spirited the hollow’s throat; realized their secrets were secure. She’d spat less at what jest; she’d hate more whom it be shared. Inside that English Hollow…another house falls under the Englishman’s spell. For, where did their shadows vanish? And, why did the gulls stop scolding? And why do they fall under the spell of the tyrant, England Rob? No good will come of this.

She stepped away from the cliff, tugged free her coat from the hedge. She stared at her hand, surprised to see red upon her colorless skin. Blood, red. Thin, jagged lines…crisscrossed upon themselves.

Mary Blevins heaved her basket over the cliff’s edge, sent the bones and the rotting flesh tumbling down the embankment where, she imagined, it plunged into the sea. She took to the path away from the escarpment; a path through the frozen bog; a path ended on the hill where stood Ken Kerr once warm, now cold as a grave’s stone; a path old and worn, yet where new paths must now cross. Whatever path will break his spell. Break his siege. A new year, but three days away -- for Ireland. Only Ireland. A new beginning, for Ken Kerr and Ireland. Or else, a new year that must never come! 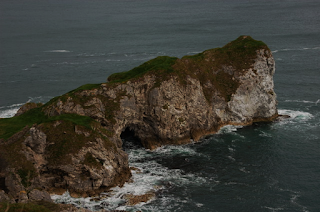 Posted by Randy Wireman on January 01, 2016
Email ThisBlogThis!Share to TwitterShare to FacebookShare to Pinterest
Labels: Wireman