Punting Down the River Styx

My dear readers, I am late. Late for a very important date. The holidays are such a grand affair (flu notwithstanding), but all good things must come to an end. And now, after returning to the "day job" after such a lengthy holiday, there is naught but chaos. I am besieged! I have fought heroically, but the struggle leaves little time for ought else.

I must acquiesce - lay down my arms and retire to my fortress to sleep. But I shall not surrender. Nay, dear friends and fiends, I shall not. 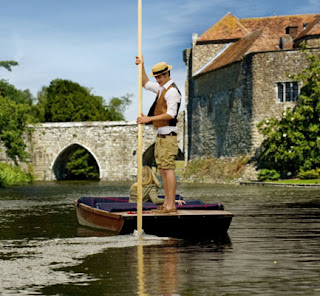 The Wild Man smiled at all of them and then said in a large voice, “We have nothing to fear but fear itself…and possibly small squiggly fish.” He paused for a moment with a curious look upon his face. His eyes crossed then he shook his head and continued. “We are few, and yet we are not alone!”


He lifted his hand towards the tree nearest to him; a silver skinned beech with yellow-brown, papery leaves still clinging to the tips of its branches. He trilled a soft whistle into the snow hushed air and waited. His companions watched silently as the Wild Man stood stock still with his arm outstretched towards the slumbering tree.

Snow began to fall as the clouds gathered across the sky, yet the Wild Man did not move. Large flakes of snow layered into his hair and across his shoulders, giving him a mantle of white, but still he waited. After a time, his call was answered. A small bird, grey backed with a tuft of feathers crested on its head, flickered onto one of the branches. The Wild Man smiled and whistled again. The bird hesitated for only a moment, before darting from its perch and alighting on his finger.

Gently. Softly. The Wild Man pulled is hand towards him. The bird fluttered once to keep its balance, but settled to a comfortable, puffed out perch once it was near the man. He drew the bird up and whispered to the creature in a voice so low that none of the others could hear. Heartbeats passed before the Wild Man drew back, raising his arm again towards the beech. The titmouse shivered the snow from its feathers, and then took flight back into the trees.

Smiling broadly, the Wild Man tapped his finger against his nose and winked at his friends. He said not a word as he continued his journey through the drifting snow. Honora fluttered her wings gliding herself forward to follow him. Ralph shook his head and then turned with a sigh to follow behind her. Belvedere grunted as he trotted in behind Ralph with Francis bouncing precariously on his back. Thus, the little band wandered deeper into the wood aware, but resolute against, the ominous shadows behind them. 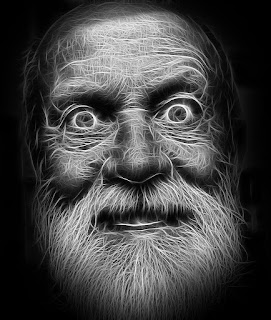