The Eyes of Truth Over Kansas: First Person/Third Person Experiment

I was in Missouri when it hit me; I actually did it!

Boy, was I scared.

I said I would go out West for a week on my own. I had the vacation time, and nobody seemed to need me for the week at work. So, I packed a week’s worth of underwear, jeans, shirts, and music, thrilled at the thought of being independent. I brought so much great music! Fun drive from Indy to Missouri, singing along and stopping whenever I felt the urge…to eat whatever and with little guilt. Sure, the traffic was starting to get a little scary in the hills. Trucks speeding, mostly, just freaked me out. I had to get through this state as fast as possible. Onto Kansas, I thought. No hills and less traffic... just one straight line of highway to Colorado.

But I nearly went off the road while driving through Kansas, because there were no hills and no traffic, and the road went on forever! Actually, I really did go off the road. Not that anyone was around to see it! I made sure to stop at every gas station to get more coffee and to use the restroom, frequently…just to keep awake, really…just to walk around for a few minutes until my senses came back to my head.

I hated Kansas, because I felt like I could never leave it.

Colorado was reached; but even the Colorado-green mountain scape of license plate fame felt like Kansas for a long, long tread until that strange, gray horizon grew darker and finally became the Rocky Mountains.

The Ozarks convinced him that he was nowhere near his recent past. He was on his own, in his red Chevy, with his 80's and some 90' and few 2000's music set to repeat randomly and his off-key singing giving in and out. He was scared, suddenly, when a semi passed him too quickly just as he had gotten into the smooth yet dark hills. This was too real, and too dangerous, this solo trip. What if he wrecked? Who would tell his family? How would he deal with the ten or thirty or 60-second knowledge before death that he'd died on a lonely Missouri interstate near a dilapidated Dog n Suds?

He had hoped Kansas would give him some rest from the curvy terrain. That state was predictable and flat... and bare; no surprises there, in Kansas…. Only skinny mile markers every so often reminding him of where he was; where he was not, and what he passing.
As the day crept to noon, and deep within a hundred miles of Kansas DNA, he no longer felt safe in the opening Plains. Kansas was consuming, perpetual; a time-warping Terra firma. Who would miss him? That’s all it was. Medication. This trip. Prescribed by his therapist. The traveler needed to find himself by being alone with himself. Medication. He knew it. So, too, did Kansas, because....

No escaping Kansas. Miles and miles of him. Kansas was like… stretching the traveler over his chest; his thick belly both a hard and gentle landscape of masculinity and rebellious desire that demanded he know thyself and declare who the hell cares what they think of us. Kansas's treasure trail fastened down the passing of time as Kansas drew his strength from the heat of the day, yet cooled the friction of the traveler's wheels. Kansas would only let go of him if he promised to lay his down across his prairie chest, plunge into the new sweat of a forever kind of tone, smooth down the beard that burned him with gas station aftershave, and roll over, roll out, and roll down the trenches of starved lips until his traveler succumbed and fell, head first, into the dark eyes and hazel pools of Kansas.

And jealous was Kansas; for when the dusk exposed their souls to the vacuum, Kansas would drive his man off the ridge in the melody of poems whispered into his traveler’s ear, promising vastness to roll and roam all day while gracing him with protected sleep in pillowed arms of washes and ridges; as they look up at the night sky black and dream and talk and make love again... and Kansas would ask... gentle and serious... if his man would stay... if he would just stay a bit longer... a bit longer, here in Kansas; then so, too, would Kansas stay with him.

The traveler, he loved Kansas, because Kansas promised to linger for only him.

Yet, late into the night and early in the morn, while Kansas rolled over to the east when a new traveler broke across his borders... and when Kansas longed to get to know him well; the Wise Men to the West, from behind a thin gray mist above vast and impenetrable green gates, had roused the traveler from his Kansas stillness; called the man to his safety from his Kansas play; promised the man a color beyond his Kansas gold if he snuffed out his intoxicating Kansas kisses and let the dose of caffeine from his perpetual Kansas gas station coffee take control of the wheel and to crack the windows to blast his face a dry, hard, sandy gush of oxygen.

Ex-lover Kansas. An eternity of bliss lost to The Rockies. Only the hurt still lingers. Nothing else, really. 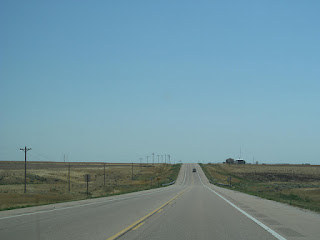 Posted by Randy Wireman on January 29, 2016
Email ThisBlogThis!Share to TwitterShare to FacebookShare to Pinterest
Labels: Wireman