Grief. It is such a powerful emotion. At its strongest, it has the capacity to swallow us whole. At its least, it greys the world around us muting all other emotions. It can hurt, such that even the strongest can be brought to tears if it cuts deep enough.

There is a small cemetery down the road from us. I drive past it every day on my way home from work. A tiny church presides over this sacred ground. Pale yellow paint flakes off the clapboard siding of this single story building. A rusting, but reasonably well maintained wrought iron fence wraps around the front and sides of the cemetery ending at the farm fence that borders the field beyond. A double gated arch serves as entrance with the word "Salem" picked out in iron and faded white paint. Old whitestone markers that likely date back to the founding of the state lean and canter in the southern half near the church. Their engravings worn smooth through the relentlessness of time and weather. Yet, just past the church, newer black granite stones with their sand blasted carving begin to intermingle with stones placed in the later half of the last century. Familial plots for those families who are of the very soil of this town.

Now, one day last summer, I happened to see a car parked in the cemetery as I made my way home. This was unusual as I hardly ever see anyone visiting the graves. It was a gold colored '90s Malibu with a sizable dent in the front quarter panel. It sat in the gravel row back near the farm fence - parked and engine off. As I slowed down, I caught sight of a young woman sitting crossed legged in front of a grave. I couldn't tell if there was a headstone or not, but I suspected that it was a new interment. I did not linger out of respect for the young lady, but it did seem to me that she was having a conversation with the spirit anchored there. I drove on, noting that she had not turned her head at my approach or departure.

I saw her there almost every night for months afterward until the weather turned bleak and winter. Sometimes there was someone with her. A man, usually, sitting in a green camp chair. His 4x4 truck parked a respectful distance from the gold Chevy. More often than not, though, she sat alone in gloaming of the evening facing toward the grave and away from the world.

Since then, a marker has been erected at that grave. I can see it from the road - polished black granite tall against the chaff of last years crop -  but my aging eyesight won't allow me to see the markings on it.

I cannot bring myself to pass through the iron gates to view the stone. It would be a violation of that young woman's grief.

At least that's how it seems to me. 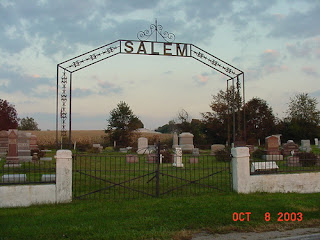