I have been reading the Irish lately, Yeats’s collection “Irish Folk and Fairy Tales”. While I always gravitate to an old story from my people (especially romantic stories and haunting ones, too), I picked this collection of time-apparent yet vibrant tales more for research than for pure enjoyment.

Uh, yeah. Researching for a book is a poisonous endeavor that kills my soul…! Yet, I am interested in writing a tiny collection of my own such tales centered on Broad Ripple – though purely (at this point in planning) conjured from my own imagination, which is entirely different altogether (more on this later). And I want to write it with a descriptive, yet more old school voice that I think is quite evident in Yeats's collection, for a kind of authentication.

Yeats is the collector, editor, and observer of these legends retold by the authors of his time. Though I have noticed a similar descriptive pattern and voice across these accounts, I have to keep reminding myself that Yeats authored only the ones with the following words written below the titles: W.B. Yeats! Thus, while most of the stories were not created by him, either his retelling is superbly and absolutely poignant, or the whole of his generation of writers had great command of the English (and Irish) language and wrote this way as effortlessly as sipping water. Whatever the circumstance, I am betting that Yeats added his own unique touches. How could he resist? Anyone could gather stories already written and glue them together in a book! So, whether from a better schooled generation or the one and only Yeats, these old tales have life and angst and sadness and wonderment no matter their age. I still recall them while I happily kill pancreatic cancer cells in a plate; imagine those times long ago while I drink diluted Folgers (a ‘perk’ courtesy in our department…so I won’t complain much more). I appreciate their discipline and descriptive talents, as well as their narration; even if many a hand strung together. It works for me.

A fair critical eye would state that some tales were perhaps too tattered by age to resurrect. Yet, while Yeats is more like a historian, he never gets in the way of the effect those tattered tales once tried to cast. Yeats does not judge; he collects. Frankly, if I were in Yeats's position, then I’d be tempted to embellish (they are like backbones to a greater beast. I-must-fix----them!). So, whether Yeats’s talent is to observe or to ‘clean up’ these supernatural stories (and poems!) –or both, the whole effect of a collection of Irish folk and fairy tales actually urges me to want to do something similar. Yet, here’s the twist hinted at earlier: I want to create my own stories and only ‘act’ as collector. Odd, I know, how I make myself work harder than I need to do. Sigh… But, I don’t know of any legends or fairy tales or ghost stories about my village of Broad Ripple. The kinds of stories that come out of here are more superficial and in the nature of ‘the day after’ regrets or heart thumps that derive from clubs and the bad choices made among the young and the transient. (I was one of them, too.)

So, I asked myself a few weeks ago, “Hey Rainbow Willingham. Why don’t you make up your own ghost stories of ye old Broad Ripple?”

Well, unless or until I learn of authentic tales of the Big Ripple, I may do just that. Oh, but please share with me some stories if you know of any (use message contact to the right of the blog). You might just save me from myself!

If I do proceed (and as writers, you know exactly what I mean by ‘if’), then Yeats will be my model for effect – but only in caricature. What really matters, of course, is the actual stories. If I’m going to fake a Yeats collection, then my stories have to be damn thrilling and vivid and slightly time-worn if they are to be worthy of a classical tale. I may even stain the digital pages in tea...add a few rolled page ends here and there. Again, I make life so hard for myself! I guess I need more than just the challenges of time and to actually publish something (sheesh!). Back to Yeats.

Here is one of my favorite ghost ‘stories’ so far, a clever poem written by Alfred P. Graves (giving evidence to the possibility that Yeats’s generation were all, indeed, gifted writers). Clever, because take note how the anguished woman is made aware that her lover visiting her in the evening is his spirit; yet she still spends the night with him, no doubt in his arms. Beautifully written and purely Irish (and also available here, with other Alfred P. Graves works: http://www.bartleby.com/250/25.html)

When all were dreaming but Pastheen Power,
A light came streaming beneath her bower,
A heavy foot at her door delayed,
A heavy hand on the latch was laid.

“Now who dare venture at this dark hour,
Unbid to enter my maiden bower?”
“Dear Pastheen, open the door to me,
And your true lover you’ll surely see.”

“My own true lover, so tall and brave,
Lives exiled over the angry wave.”
“Your true love’s body lies on the bier,
His faithful spirit is with you here.”

“His look was cheerful, his voice was gay:
Your speech is fearful. Your voice is gray;
And sad and sunken your eye of blue,
But Patrick, Patrick, alas ’tis you.”

Ere dawn was breaking she heard below
The two cocks shaking their wings to crow.
“O hush you, hush you, both red and gray,
Or you will hurry my love away.”

“O hush your crowing both gray and red
Or he’ll be going to join the dead;
O cease from calling his ghost to the mould,
And I’ll come crowning your combs with gold.”

When all were dreaming but Pastheen Power,
A light went streaming from out her bower,
And on the morrow when they awoke,


They knew that sorrow her heart had broke. 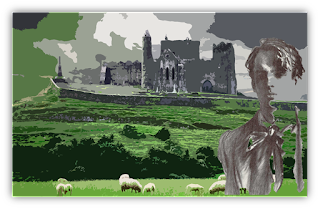 Posted by Randy Wireman on June 04, 2016
Email ThisBlogThis!Share to TwitterShare to FacebookShare to Pinterest
Labels: Wireman