An Excerpt From My Prologue

Tonight, dear readers, I will be bringing you another episode of "As the Dragon Flies". In this episode, our young protagonist is trying to impress the girl. But wait, there's more ! Are they supposed to be there? Will they get caught? What the hell is up with those fish?

Yeah, I need sleep. So, here's an excerpt from my prologue.


Light from the single sconce outside spilled across the floor but failed within a few feet of the threshold. Beyond that, lay darkness like that of a long forgotten crypt. The cool air gave the stone beneath his feet an edge that sent a shiver through him. Somewhere ahead of him, a single drop of water struck the surface of something larger. The sound, though minute in the world above them, magnified to a shout in the lightless silence.

“Are you sure this is the right room?” asked Branwen.
Even at a whisper, her voice sounded unnaturally loud. Darby nodded. Silently, he took a few steps forward until he was enfolded into the dark. He heard the soft pat of her bare feet as she followed him.
“We didn’t even bring a candle. How are we supposed to see it?”
“Just stay here,” he replied.
Feeling his way with his feet, Darby shuffled forward until his toes brushed the ragged edge of the stone where it met water. Reaching down, he slipped his hands into a hidden pocket within the sleeve of his shift. His fingers closed around three smooth stones and drew them out. A faint glimmer reflected off their glass like surface hinting at a deep green color. He hefted them in his hand, feeling the surprising weight of the thumbnail width stones as they clicked sharply together in his palm. After taking a steadying breath, he knelt and plunged his hand into the cold water.
“Mother Ilora, please let this work,” he whispered into the dark. 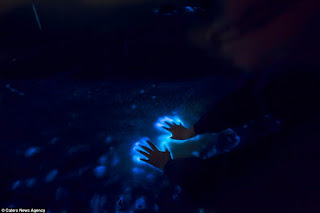 Within moments, small points of light began to float into existence within the water. Iridescent blues and greens swam in lazy patterns, awoken from necrotic slumber as the disquiet from Darby’s churning hand and clicking stones spread outwards. Darby heard her gasp softly as the lights grew steadily brighter. He smiled, savoring a moment of satisfaction at having impressed her, and then pulled his hands from the water. Standing, he watched as the once dark surface emanated a phantasmal glow that illuminated the entire cavern.
Grey walls, infused with streaks of red and orange, reached upward; their undulating surface arching upwards to form a vast expanse. Veins of cupric stone meandered across the walls, each with seams of knobbled rock frozen in the act of falling. A damp sheen covered all, reflecting and magnifying the light from the lake below. For it was a lake, that spread outward beyond where Darby could see with only the reflected light hinting at the depths that the far shore reached. The waters were placid now as the ripples dissipated into the furthest reaches of the cavern. So still was the water now, that the stone that formed the roof of the cavern and all its pendulous character was reflected in surreal perfection.
He turned and held his hand out to her. She dashed over to him taking his hand into hers. Darby smiled as her fingers entwined with his. With a gentle tug, he took a step towards the water, nodding his head to encourage her to follow.
She resisted. “You know I can’t…,” she said pulling against him.
“It’s alright,” he said letting go of her hand. “Watch.”
He took a step out onto the surface of the water. Step after step he strode outwards until he was nearly halfway across. He turned and beckoned to her silently. Branwen stood at the edge, and for the first time since they had met at the gentle age of five, he saw doubt in her eyes.
“But…,” she said hesitantly. “You can’t use the Féyr. How…how are you doing this?”
“Not everything need be about the Féyr.” He held out his hand and said, “Trust me this once and take the step.”
She paused for the span of three breaths before hesitantly lifting her foot and placing down onto the surface of the water. Darby smiled as the realization of the illusion dawned on her. He wiggled his toes, feeling the cool, black rock of the walkway set a finger’s width below the water. Branwen laughed as she dashed down the path, the splash of her steps echoing through the chamber. When she reached him, she took both of his hands into hers and pulled him close. She leaned in touching her forehead to his, her face mystic in the ethereal light. Darby’s heart raced at their closeness. His breath quickened at the look in her eyes that was far from doubt.
Posted by Michael T. Moir on August 31, 2016
Email ThisBlogThis!Share to TwitterShare to FacebookShare to Pinterest
Labels: Moir