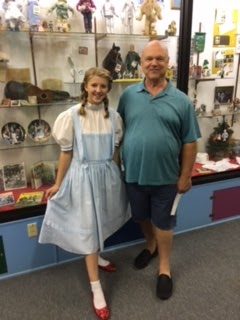 We spent the night in Tucumcari, New Mexico at a wonderful little motel that had been restored to its glory days right on old Route 66. It is called The Blue Swallow. The have a fire every evening and make s'mores served with wine.
The next day we stopped as close to the spot as we could guess we ran out of gas forty years ago and took pictures and looked for a boot. We pressed on, eating cookies as we went, visibility out the back window getting better as the miles piled up. We stopped at White Sands National Park, an incredible place if you never have been there. It is like a big white beach in the middle of the desert.
By the end of a very long Monday, we pulled into my favorite place I have ever lived, Tucson, Arizona. More of our trip next time. For now, Lana and I would like to wish you and your family the very best Thanksgiving Day possible.
Posted by Unknown on November 24, 2016
Email ThisBlogThis!Share to TwitterShare to FacebookShare to Pinterest
Labels: Krulik