A little over a year ago, my best friend from college, Steve and his wife, Janet, stopped by our house on their way to one of their daughter's homes in Ohio. Steve and Janet live in Phoenix, and we saw them about every three years or so when we went west on vacation to see one of my favorite States. While they were here, Steve had this idea he had been pondering in his brain for some time, to recreate our spring break trip of 1976 from the University of Missouri, that had both ups and downs.
He said if we were both up for it, which would be a road trip, as the original one was, he would plan the entire thing. He also said that, due to schedules with their own work and trying to stay at the Grand Canyon, which take reservations a year in advance, we would need to plan on October of 2016. The trip sounded crazy and fun, right up our alley, so we said yes. Over the next three or four of my posts I will write about our trip we took about two weeks ago, which lasted ten days. I will write the post in two parts-the first part will be "the then" part, how it happened in 1976, during that section of the trip, and the second section will consist of the 2016 part of the trip, what we did this time,
There will be much of the trip we added this time around to the front end of the trip, sight-seeing as we went, that we didn't do the first time. Steve and I drove from Missouri to Arizona nonstop, in roughly 24 hours, just to get there, to start having fun, because we were twenty years old. I hope I can translate this into the fun it was for us.
THEN
Steve and I were on the collegiate bowling team back then. Remember that throughout this trip. Believe it or not, it will be a factor. In those days, Steve drove a Volkswagen Beetle he called Olivia, after Oliva Newton-John, and I had a Dodge Demon. During my college days, I held the world record for running out of gas. That is a story all by itself, but I will leave it just right there. I ran out of gas a lot.
I mentioned this before, but to set the stage, my dad was a pilot in the Air Force and my high school years were spent in Tucson. Steve and I were talking about spring break and we decided we wanted to do something together and I was always talking about Arizona. My parents had already transferred out of Tucson since I started school, so if we went there, we would not have free lodging, but we didn't care. Steve had been to Arizona one time, and very briefly and only one place. He was very eager to see much more of it being a geology major.
Word got around that we were going to go and two girls who were friends of one the bowling team members approached us about riding along to Phoenix. They had friends out there and wanted to spend the week with them. We said sure and now we had, are you ready for this? Lori and Dori. You can't make this up. Off we went, we with Steve and I driving non-stop to Phoenix and Lori and Dori in the back seat mainly sleeping.
Now
Steve and Janet, after comparing costs of renting a van from Missouri, decided to drive their van from Phoenix to St. Louis. We drove over from Indianapolis on a Friday and met them there. We left the next morning, a Saturday, for our old campus, the University of Missouri, located in Columbia, halfway between S. Louis and Kansas City. My wife Lana baked up ahead of time enough homemade cookies to feed thirty people for a month. Janet brought snacks of about twenty varieties in quantities that, combined with the cookies and luggage, made it difficult to see out the back window. It was like the movie Vacation without the kids.
After loading up at the arranged 8 am at our son's house, just outside St. Louis, it was a brief stop for coffee on the road, and off we went. As we settled onto I-70 for Columbia to visit Mizzou, cookies were already being dispensed from the backseat, something Lori and Dori never did.
Two hours later we visited our old campus to find so many changes to the places we hardly recognized it. A new Student Center stood where we used to go so many times to hang out and bowl. No more bowling center now. We had to take a moment to say a few words in remembrance. Then we stood in awe for the structure that stood before us. The four of us toured it, bought some souvenirs, and continued on around the campus, remembering.
For two hours we walked, took pictures, talked, told stories, laughed, and remembered things long forgotten. Lana and I have been married for thirty-five years. We've been to Mizzou a few times for football games and a couple other fuctions, but it seems we never had time to walk around and show her the grounds. It was great to take the time after so long to show the love of my life where I went to school and for me to remember just a beautiful campus Mizzou really is. 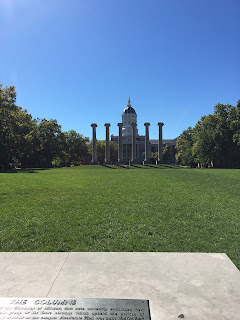 We loaded back up, grabbed some water, and guess what? Cookies!! Off we went, towards Kansas City. Our tour guide, Steve, had the entire trip planned where we were going to stop for each meal and where we would stop for the night each day. If there were sightseeing places to see along the way, he had them planned in also, and everything was a secret. It was our job to ride and relax and my job to keep the banter going with Steve. Easy to do as we have the same sense of humor.
We had lunch in, shall we say, a less than well-to-do part of Kansas City. When we pulled up in front of this place, I think I heard Lana moan. Steve said something like, "Give it a chance. This place was featured on The Food Channel for its barbeque and the atmosphere. They have live blues and jazz." The place was called BB's Lawnside BBQ. It looked like crap from the outside, but the place was great and food was better. If you ever around Kansas City, and if you like barbeque, you need to go.
We finished the day just outside Witchita, in a cheap motel, the worst motel we would stay at for the entire trip. We were tired, but had a good time for the first day. We went back into town for dinner and came back to the motel, grabbed a few cookies and retired for the night. Once my wife taught me how to use the shower (Yes, she did), I had a nice shower and relaxed. We looked forward to the rest of the trip.
Posted by Unknown on November 10, 2016
Email ThisBlogThis!Share to TwitterShare to FacebookShare to Pinterest
Labels: Krulik