An Excerpt from Chapter Two

Tonight, dear readers, I bring you another installment from my novel. This is from Chapter 2, though that should come as no surprise. I intend to make this a regular habit...well, at least as regular as I can manage. These are only extracts from the larger work and are not meant to necessarily make sense with previous excerpts published herein. Enjoy!

Darby woke to the plangent ring of Hadran’s bell. He blinked languidly, grimacing at the pain from the cramp in his neck as he sifted in his chair. He smacked his lips and frowned at the grim and fuzzy taste that he found there. A woolen blanket, patterned in grey and green check, fell away as he straightened. The fire in the central hearth and the candles in the wall sconces were all lit, their glow reflecting warmly off the white plastered walls. A quick glance to his left found that the pendant had been placed back inside the box, though the lid had been left open. He sighed as he reached over and snapped it closed.

‘She knows me too well, my daughter,’ he thought as his fingertips lingered over the carvings.

He pushed against the armrests in an effort to rise, but found his feet anchored by the snoring form of the family dog. Falling back into the chair, Darby wiggled his feet trying to dislodge the oblivious creature to no effect. Wolfhounds were a large breed, but Beacon was bigger than most. Nearly as long as Darby was tall, the dog weighed nearly three stone all of which seemed to be resting on Darby’s feet and ankles at the moment.

“Heyup there, hound!” he called.

Beacon grunted briefly, pushing his hind legs out in a luxurious stretch before settling back into his rhythmic snoring. Darby chuckled and shook his head at the elderly animal. Ten years prior, there was little that would have kept the dog from springing up, loping towards the rear door and scrabbling at it to get out. Now, at age thirteen, Beacon desired little more than regular meals followed by equally regular naps.

Darby decided against continuing to try to rouse his aged friend, but rather pushed back his chair until his legs were nearly extended. Slipping his feet out, he rose and stretched to try to relieve the stiffness in his back. Crossing to the hearth, he raised his hands towards the warmth of the fire. Steam poured from the kettle as he caught sight of a small tray on the hearth ring containing a cup, fired clay teapot with a chip at the end of its spout, and a small wooden bowl with porridge. He smiled knowing that Oona must have grumbled relentlessly at his lack of sense for falling asleep in his chair – again. She really was very much like her mother.

The bell rang again. Yet, before the melancholy of Branwen’s memory could envelope him again, he caught sight of a scrap of parchment tucked under the cup. Pulling it free he read the single phrase scrawled out in Oona’s hand. 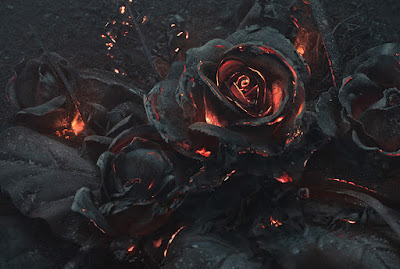