Cherokee Wisdom: The Golden Sheep and the Tundra Wolf

“A fight is going on inside those sheep,” The Tundra wolf said more to himself than to his prized golden sheep as they stood on a grassy hill overlooking the American suburbs. “Isn’t it marvelous?”

“Marvelous?” Asked the Tundra wolf’s prized golden sheep as he chewed blades of grass from a lawn that had yet to be mowed in the early spring season. “What is so marvelous about sheep?” He licked and licked at the grass caught under his hoof, wondered why they stuck to his hoof at all. “They are only sheep.”

“Yes. They are – they…” The Tundra wolf observed his golden sheep’s noisy licking and then shook his head in slight disgust. “Sheep are not marvelous. They are spectacularly dull. Yet, all sheep have a spirit that motivates their dull lives. And what makes their lives so dull is an amazing and constant battle between their two wolves.”

“Wolves? Did you say wolves?” The golden sheep gave up on licking and returned to chewing a wad of cud when it remembered he still had cud lodged inside his cheek. “You mean, wolves like you and me?”

“Yes. Indeed." The Tundra wolf clarified, suppressing a grin, "Wolves like you and me." He bent down and gripped in his long jaws the neck of his prized golden sheep and gave it a hard tug. He admired the wealth potential of this golden wool squeezed tightly between his teeth; the years of investment, the hours of research; the years of calculating and the hours of second-guessing – all the strife was worth the trouble. "Wolves like you and me. Yes." Oh, he could imagine the delicious, wet meat that his teeth ever so gently gripped...but if only a gentle bite of his fangs onto the sheep's skin did he feel the heat released from the sheep's fat... No. He mustn't think like this. For although this golden sheep would be delicious, he was worth a quarter of a billion dollars, and its golden progeny would be worth --and most certainly they will-- its children would be worth significantly more.

The golden sheep grunted and then thought whether to take a nap or to eat more grass. "We wolves eat sheep."

The Tundra wolf let go of the golden sheep's neck and then released a long, well-earned sigh. “Yes, wolves eat sheep, my pup.”

How simple it all was to now have this silly, stupid golden sheep collected in his own flock of special sheep. Oh, how incredibly easy! How could he have guessed that after all those years of building trust and funding clandestine payoffs through corporate shell deals and providing opportunities for sexual pleasures mixed with grand ceremonies; that all this Tundra wolf had to do was convince this golden sheep that he was not a sheep at all, but a Tundra wolf!

“So, if wolves eat sheep...” the golden sheep lifted its heavy head, “How can sheep have wolves inside of them?” The sheep then returned to eating the grass around his large head even though his mouth was too full of cud to gather any more grass.

“Well," replied the Timber wolf, "I meant so only metaphorically. Forgive my English…I will try to explain, but clarify. The two wolves inside those sheep are really of one spirit engaged in a never ending, boring, and needless civil war. American sheep, you might accurately classify, spin in circles.”

“American sheep? But, I am American. Thank God I am a wolf.”

“Ah, yes. So, listen as I explain. One wolf inside the American sheep is strong – he is boisterous, arrogant, privileged, fearful, and racist. The other wolf is weak – he is discreet, peaceful, hopeful, pragmatic, and empathetic. That is the civil war they have every day inside their delicious bodies.”

“Whatever.” Said the golden sheep as he tried to decide whether he should swallow his cud or continue eating the grass. “It’s all very confusing, this civil war.”

“It does not matter. The civil war in American sheep keeps them preoccupied. And to Tundra wolves like me, er -- like you and me; 'a preoccupied sheep is a delicious treat', as they say."

The Tundra wolf drooled as he scanned over the suburbs where thousands of sheep plugged into iPhones sipped their Green Tea Frappuccino and flipped off a bus they had to get around in their black SUVs on their way to their offices, while tired sheep looking out in a daze from dusty bus windows counted down the stops to uptown as they clutched their folded restaurant aprons ignoring the strange woman singing in the back seat.

The golden sheep thought about this civil war thing for a minute, although it was difficult for him to think if only a minute. He sighed as he plopped onto the lush, green turf, tucked his legs under his fat belly and relaxed his chin on the tall, moist grass…and then absentmindedly chewed off the tips of grass blades that happened to have grown near his mouth. He then chewed down to the root all the grass within his mouth’s reach; chewed and chewed until he gulped the green mash down his hungry throat. He wanted more grass, but realized that he would have to stand up and move a few meters away to a new patch, so he just rested his chin down on the dirt and looked up to his Russian friend.

“Did you say something about wolves a minute ago?”

The Tundra wolf chuckled and licked his sheep’s golden head. “I will tell you again, my canine friend. Inside each American, there are two wolves. Both are in a constant battle for their soul.”
“Which one, do you think…” the golden sheep asked, but could not help but cough up his cud and start chewing it again, “which wolf will win the battle inside those dull American sheep down there?”

The Tundra wolf sniffed the air at the heme he was sure came from his golden sheep's busy mouth; thought for a moment if he should just eat the sheep and be done with it. Instead, he gently nipped his golden sheep’s thick, fatty nape, only to release it just to see if the blubber would hit the freshly upturned earth or be absorbed into the sheep’s girth. His fun swiftly faded as the sheep’s blubber hit the ground with a heavy thud. This sheep of his was getting too fat for its own good. Yet, a grin slowly cracked deeply across the Tundra wolf’s face, for he knew it was better to have this prize than to not.

“I am still curious, my Russian brother..."


The Tundra wolf bit his golden sheep’s neck again, only to release it again and to watch, again, how its blubber hit the earth once again. He was growing tired of this sheep. This dull sheep. This stupid, dull sheep.

"Which wolf will win inside those American sheep?”

The Tundra wolf growled under his breath and looked out over the suburbs. “Neither, my pup. For we shall poison the grass that feeds both.” 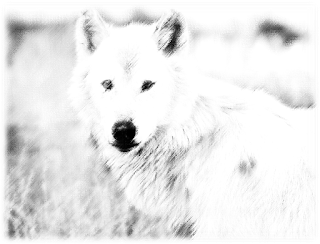 Posted by Randy Wireman on May 07, 2017
Email ThisBlogThis!Share to TwitterShare to FacebookShare to Pinterest
Labels: Wireman