It's That Season Again

Yes, it's that season again. Can you guess what it is? You know it isn't time for the big guy in the red suit with the presents. And we just had the rabbit with the eggs and chocolate. Nope. Give up? You guys are too easy. Just when the weather gets nicer and everyone gets out more and starts to travel, this season begins each year. Does that help? It's construction season!
Yes, boys and girls, just when we start to move around and get out on the highways and bi-ways, our State and Federal governments go and screw them up. Do you ever notice they seem to work on the same roads over and over again? Is it me or our interstate highways within our states seem to be worked on over and over way too often? Maybe they should construct them a little better in the first place so they don't have to rebuild them over and over again. Oh well, I'm not an engineer, I'm just a tax payer.
And since I am a tax payer, let's talk about the construction crews. I for one would not want to do that job. It is a dangerous job. As you know, I drive for a living and I know that many people out there should not have a driver's license. It's dangerous enough just to drive each day, so I can't imagine being a sitting duck.
That being said, let me talk about said sitting ducks. Yep, I'm going to pick on today the average construction crew. We all drive by them almost every day. We slow down and look over at them. Have you ever studied them? Really looked at them? I have. What else is there to do when you are creeping along at 10 mph?
The average road construction crew is between six and eight. Never seen that many working? That is the point. You never will. Let's examine that. If all eight were out there, what would they be doing? Well, there is usually only one large piece of equipment out there, such as a dump truck or a backhoe, because only one guy mastered that, so someone is in there all day even if it never moves. That guy is listening to music or working crossword puzzles.
Next, there are always three shovel leaners. Usually one person is actually working a shovel with the other two leaning on theirs and pointing. I have seen a lot of construction sites where apparently the State couldn't afford more shovels so they shared one shovel and the other two workers leaned on something else, like a truck or something, and took turns using the one and only shovel available. That's four workers. Two more are supervisors. They stand around and point a lot. I have no idea at what because they look a lot like the shovel guys. I guess after a period of time after being a shovel guy, you graduate to being a supervisor. 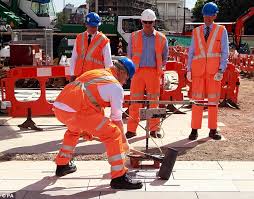 Who is left? Well, my favorite two people. The sign people, of course. The two hold a sign and a walkie-talkie. Not hard, right? These two will never be supervisors. As a matter of fact, these two will never hold a shovel. The sign, as you know has two sides, Stop and Slow. One person should be showing Slow and the other Stop and they should be talking to each as to which is doing which. I'm pretty sure they don't have to send these people off to a seminar for training, but maybe they should. How many times have you seen these clowns looking off into the distance, thinking about who knows what, and both have Slow going? Or Stop?
There was a comedian, I don't remember his name, about 20 years ago that did a short routine about this. He supposedly had an encounter with one of these guys one day who was all confused and messed up. He said to him, "Hey, you know, you can be replaced by a stick and a bucket of sand." 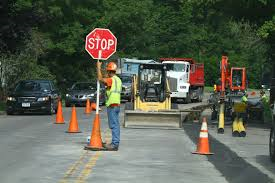 Posted by Unknown on May 11, 2017
Email ThisBlogThis!Share to TwitterShare to FacebookShare to Pinterest
Labels: Krulik