Tonight, dear readers, I would like to present to you another installment from version 1.0. Now in this version, poor Darby was simply lost in a foreign land and wanted to get home. I was told that that wasn't enough impetus to sustain the novel, by many members of the "No Name" critiquig group. As I have mentioned before, I generally didn't change things unless there was a consensus among the group members about any one given thing. This was one of those things. As such, I have changed the plot of version 2 such that it does not rely just on Darby's will to get home.

Now this bit comes from Chapter 8, which is prior to my last posting, but I don't think that matters much at the moment. Please enjoy. 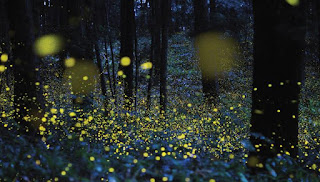 His eyes became accustomed to the sulphurous glow that suffused the space beneath the canopy of the great tree. He took another step forward and his sight was consumed by the massive presence of the trunk of the tree. Great flying buttresses of roots sailed from the body of the trunk outward keeling their way into the ground. His eyes followed the graceful line of one of these buttresses upwards until he lost sight of it in the darker regions beyond the influence of the light. The bark was smooth and grey – seamless as if it were the skin of a great beast. A second root arced opposite the first enclosing the area before him into a living grotto. He craned his neck upwards staring into the shadows until he imagined that he could see the faint outlines of the massive limbs which supported the canopy. As he stared, lightning bugs began to flicker in the darkness as they drifted in their unmistakable flight.

He smiled slightly – fireflies – something he recognized.

A soft clearing of a throat and a rustle of clothing shot his gaze back downward. Caben met his gaze. His face was solemn, nearly stoic, as he held Darby’s gaze. Darby suddenly felt uneasy again. He had heard Ladra’s translation of Caben’s speech, but being here alone beneath this monument of a tree left him feeling less than confident. His nervousness overwhelmed him and he looked away. When he did, he noticed that Caben was not the only person before him. Three other men were arranged to Caben’s right. He glanced to the other side and found three women forming the other half of the semi circle.

He could see now that they were seated in chairs of agapnathe vine grown in one sinuous continuance that formed the semi circle before him. A circular stone cradle sat in the intervening space between them on which rested a large sphere. Broader than a man could reach and capped with a wooden lid, it appeared to be made of glass. The glass was clear, but glazed in such a way that the individual imperfections created prisms which refracted and reflected the mephitic glow which emanated from within. The result was an uneven aura which suffused the air around the globe which illuminated the faces of the men and women behind it. Their brown faces made macabre by the shadows cast across their angular features. They sat silently watching him with dark and shadowed eyes as he took another step forward. Taking the cuff of his sleeve between his fingers and palm, he rubbed at his nose. Squinting, he tried to peer into the sphere. Barely a pace away, he stopped.

The dull ache he felt upon entering the canopy still sounded within him, but the object before him pulled his attention as if enchanted. He reached out with his free hand, letting his sleeve fall loose. Without a thought, his hand spread flat against the glass.

It was cool to the touch.

A moment passed before this realization settled on him. He blinked. Nearly unconscious in his movements, he leaned closer to the globe. There was a portion of the glass clearer than most just to the left of his hand. He leaned inward from his waist until the fog from his breath began to cloud his view. With a frown, he swiped at the glass with his sleeve clearing the mist away. He leaned in again, though not as close this time, peering through the clear glass. Tilting his head to be able to see through with both eyes, he saw a portion of agapnathe vine. The large waxy leaves were unfurled as the vine curled its way upward from the bottom of the sphere. The brightness of the light made it impossible for him to make out more than the silhouette of the plant, yet it was not enough to hurt his eyes.

Something on the vine moved.

Darby started in surprise, pulling away slightly. A moment passed, but his eyes never strayed from the narrow portal. As he watched, something moved along the edge of the agapanthe leaf. It was no more than the length of his thumb and nearly as wide. Identical in color to the leaf, the creature rippled upward along the leaf edge held deftly in place by a multitude of stubbed legs. A black opalescent head crowned one end with no other apparent intent than to consume the leaf. Two parallel lines of anthers protruded from the creature’s back moving in rhythm to the rippling of its body. It was from the ends of these that the phosphorescent yellow light radiated.

“The essence of the vine makes them glow.”

Darby started at the sound of the voice. It was halting and thick with an accent which made him think of the swamp. He stepped back from the globe hurriedly, blinking as he tried to adjust his sight to the lesser light. When his eyes had readjusted, he found Caben opposite him. He was standing on the opposite side of the sphere from Darby. He was not looking at him, but rather staring into the globe. One of his hands rested on the wooden cap while the other held the staff Darby had seen him carry earlier.
.
“How many are there?” was all he could think to say.

Caben smiled slightly. “Seven,” he replied turning his gaze towards Darby. “One for each Elder here.” He gestured slightly to his left and to his right with his hand.

Darby suddenly felt overwhelmed. As if the knowledge of these creatures within the globe were the final grain of sand spinning down out of the spent end of an hourglass, the overwhelming realization collapsed him onto the dirt floor. He landed with an absence of grace, such that Caben and the people around him started towards him in alarm. Darby sat where he fell, clutching Moya’s pouch to his chest. He heard the rustle of robes and the shift of sandaled feet, but nothing truly registered in his mind.

He was stranded in Ail na Mearrean.

He was powerless and all but helpless in a foreign land.

What else was there to do but to sit there in the dirt and let the world happen to him.
Posted by Michael T. Moir on July 20, 2017
Email ThisBlogThis!Share to TwitterShare to FacebookShare to Pinterest
Labels: Moir