"It can only be attributable to human error."

Sensory description of setting is essential to creative writing. We see, smell, hear, and taste the environment through a character's experience. How fun or embroiling is a story without descriptions of sight, smell, sound, taste, and touch? How boring and cardboard is a character without knowing how s/he responds to the senses? More on the latter in a second.

Because I am eternally a novice writer, I can, at times, be accused of too much sensory...and what's wrong with that? I'd rather have a string of flavorful recipes to whittle down to a fine, succinctly detailed narrative than a empty plastic bowl and a can of black beans. Why not be thinking Pistachio pancakes spread with peanut butter and sprinkled with purple poprocks? Better than "hotcakes and syrup." Actually, no it's not.

Regardless, I try to include sensory descriptions often, both when logic dictates and when the Creative Gods call upon me to do so (logically or not). For example, it’s logical to detail a joyful root beer aroma when describing a character's odd pastime activity of carving miniature Snow White figurines from sassafras wood. Root beer float, anyone? Yet, it's a richer experience when the author delves deeper into the character's state of mind whilst the man works the sassafras, noting the wood against his thumb was as limp as an apple tree twig before he whittled it down to a solid core, the sweet aroma of sassafras that often trailed from Snow White's kitchen window as he tended her orchard now having turned to the stench of burnt sap; and the likeness of the woman who he was certain loved him as much as he did her -for it was evident in her smile and the way she dressed -- now stared indifferently from the palm of his callused hand with eyes as heartless and hard as dead wood.

The character's sensory input is as important as sensory description used to describe the setting.

As if I couldn't make any less sense (ha), I would like to remind writers to not neglect the 6th sense to the five senses. This sense is that wonderful gift women are often suspected of utilizing better than the guys: Forethought.  Or Higher Awareness. Or S-S, T-T T: See-Stank, Tongue-Touching Thoughtfulness.

Forethought is when the brain collates all the sensory information and computes – I dare say feels for -- a response. Forethought makes us human folk a better cultured species. Or a badly cultured species, for 'forethought' can lead to action...or no action at all. Not doing something is a sort of passive action. Think HAL 9000 not opening the Pod bay doors. And action, or not, keeps us from killing each other. Or not. We make instant decisions based on our senses, and our decisions can remain in our heads on a whim or make our appendages do something, like purchase three sassafras logs on Amazon from Rick in North Carolina. Or vote for the color Orange. Or not vote at all.

Forethought collects, makes a decision or judgment, and...does something, something...or nothing.

Look. A machine can be made to detect atoms and to quantify and qualify all the five senses. Software can be created to flip a blue state to Orange. Yet, we (and all social animals) can do one sense better than organized silicone: We can anticipate a response and act on it -- or not -- knowing fully well that our senses may be off or lying to us, or somewhat virtual, or completely correct in all its stimuli. Input/output is great for computers, but not so great for us humans. HAL 9000 was supposed to be as human as he was chip when it came to forethought. Forethought = personality...higher awareness of self. Without this higher awareness and our imperfect or illogical interpretations of the senses, then we would jump off a building just like Spidey Man with our virtual goggles, or not care to read lips when Bowman and Poole go hide in a pod. Without forethought, we might never really wake from a dream, or might assume that we're burning an actual Ocean Breeze instead of a ocean breeze-scented candle. Without forethought and our error-prone thinking, we might do things impulsively, like vote for a terrible, terrible person based entirely on our faulty sensory.

It takes great effort to make our decisions look as heartless and automatic as a computer's input/output calculation. Because we are human.

More importantly, you couldn't fall in love with someone who you knew damn well might end up breaking your heart if she decided to leave you behind for an eclectic family of dwarfs. Forethought is caught between the physical neuronal potential of the five senses and the quantum potential of 4-Dimensional energy, with a probe ready to detect all that available sensory detail and collapse them upon themselves to make something happen. Or not. Time to start another Ms. White figurine. Where's me carvin' knife?

And, unlike other social animals such as ants, bees, and sparrows -- and possibly just like HAL 9000 -- humans are imperfect forethoughters, and that makes us freakin' interesting creatures to read about! (Can you name one intriguing story of an ant, bee, or sparrow learning how to kill each other with a zebra femur? No. You cannot.)

Thus, give your story all kinds of sensory detail, yet make your character's forethought calculations be known to us readers, bad math and all. Describe how your character uses the senses to decide something and how imperfectly your character interprets those senses. Detail why your character might choose to ignore them even against all moral impulse to heed them. Because, sensory decision/indecision/ignorance leads to real life tension. Like sassafras. Like a Bicycle built for Two. Like Orange. 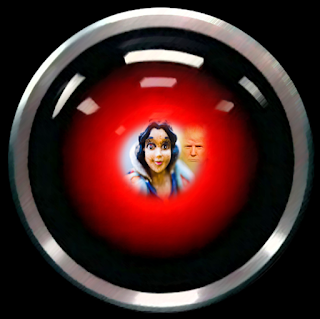 Posted by Randy Wireman on July 15, 2017
Email ThisBlogThis!Share to TwitterShare to FacebookShare to Pinterest
Labels: Wireman