Today (yes, I am actually posting during the day), dear readers, I will leave you with another portion of version 1.0. I hope to have more of version 2.0 ready by next posting, but I can't promise anything. Hopefully, you will all find this entertaining enough to forgive my lack of progress. In this section, Darby meets a secondary character named Ladra. 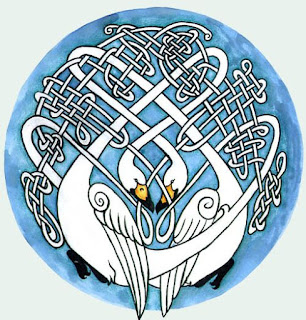 The next morning he awoke with sunlight streaming through an open window onto his face. It was a deliciously warm feeling. He almost smiled, until he remembered that there were no windows in his aerie. He was not home. Yet, anything had to be better than that miserable island in the swamp.
"S' he awake yet?" came a man's voice from the other end of the room.
A door stood open flooding that end of the room with sunlight. A narrow man stood talking with a short gray haired woman. She whispered something unintelligible to him  while peering over her shoulder at Darby. The man nodded saying something in return in the same foreign language. Together they walked over to the foot of his bed.
"You're an odd sort," said the man. His thick eyebrows butted against each other as his wrinkled face creased into a frown. White and grey streaked through his hair and beard. Two braids, one on either side of his head, fell down behind his shoulders. The rest of his body was hidden by a thick neutral colored cloak clasped at his chest with a silver chain.
He studied Darby for a moment longer. His face relaxed a bit rearranging the wrinkles into what could have been a smirk. "Are you an islander?" he asked.
Darby looked at him dumbly. He did not know where he was let alone what an islander was. He opened his mouth to speak which led to a spasm of coughing. The woman scurried over to the basin  clucking in a nervous voice. She poured water into a glass obtained from one of the drawers then brought over to Darby. She insisted on holding the glass for him waiting patiently until he had drunk it all. When he had finished she pattered back over to the chest.
A million questions cascaded through Darby's mind each one more important than the last. He did not know where to begin. At last, he merely blurted out, "Who are you?"
The man smiled. "Just like an islander to answer a question with a question." He pulled a chair over to him and sat down. "Right," he continued after a bit of fidgeting. "Well, I suppose I could oblige you that much. I am Ladra aes Sid. The endearing soul which greeted you in the swamp was my friend Trogg."
The woman made a derisive noise at the mention of Trogg's name. She made an unusual sign with her hands then began fussing with Darby's bed clothes. Darby agreed with her no matter what she had said.
"Trogg wanted to come in and check on you himself," continued Ladra. His smile grew wider at the stern glare from the woman. "But Maeta here wouldn't here of it." he laughed aloud as Maeta seemed to blush. "She wouldn't even let him come into town with us for fear that he would scare the children."
Darby nodded. He thought to himself that Maeta was a very wise woman. "Where am I?" he asked to neither one of them specifically.
Ladra's face took on a mask of puzzlement. He grabbed hold of one his braids rolling it between his thumb and forefinger. The absentminded gesture unblocked a section of Darby's memory. Panic, worry, and alarm smashed into his consciousness. He sat up tossing aside the sheets nearly falling out of the bed in the process.
Ladra and Maeta were by his side in an instant holding him up from either side. Darby grabbed hold of Ladra's shoulders nearly shouting, "Where is Moya?"
Ladra did not flinch. Darby continued to cling to his shoulders, but Ladra did not try to move him. His face had become impassive. Darby's panic only worsened. It had to have been a nightmare. A delusion created by a distressed and wounded mind.
It had to have been.
"Your friend was dead when we got there. "stated Ladra flatly. "Sigat poison kills instantly to keep down the loss of blood."
Darby faltered. His legs began to wobble beneath him. He sank back onto the bed as panic sank into grief. Moya had died while he had watched.
Ladra laid a hand on his shoulder. "We buried her on the hill just north of town. We didn't put up a marker. I don't know much about islander ways so I thought it best if you did it." He paused as if waiting for a response.
Darby had barely heard him.
He nodded because it seemed the thing to do.
"Right," continued Ladra with a sigh. "Well anyway, Trogg has the girl's necklace and bags. When you're feeling up to it, we'll take you up there to do whatever it is you have to do for her."
Silence.
Darby stared past Ladra at the sunlight which still streamed through the open doorway. Dust motes sparkled in the luminescence as they drifted towards the floor. He watched the particles fall in their lazy wafting dance while his mind echoed the words. 'Moya is dead.' The phrase clanged through his mind sounding a knell which excluded all other thought.
He had been killed by a creature that Darby could not even begin to identify. His ignorance had cost Moya her life. Yet, somewhere within him he knew that that was not right. A small voice within whispered that he could have done nothing even if he had known the beast. He ignored the voice, choosing to wrap himself within the darkly comfortable folds of grief and self doubt.


The soft touch of cloth against his cheek startled him. His eyes focused on Maeta's wrinkled face. The lines of her weathered face were drawn deep into a worried frown as she dabbed a cloth at his cheeks and eyes. Darby made to push her away, but found himself restrained the deft placement of a small sinewy arm. She murmured frequently as she fussed over him. When she seemed satisfied that all the tears had been wiped away, she turned to the pitcher and basin. She tossed in the cloth wringing it repeatedly with both hands. 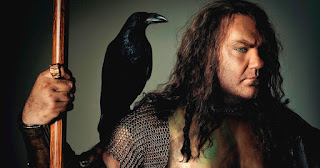