Regarding some much posted about projects, I’d like you to forget about two ideas that I have shared in the past: Interstate Pan and the Broad Ripple Ghost Stories and Fairy Tales Collection. No, wait. Maybe not the collection. Okay. Maybe that, too.

Interstate Pan has been shelved for the summer and will be shocked back into existence sometime around November of this year. Dissin' the Broad Ripple collection has more to do with talent, in that I fear I lack it. Yes, that old Writer’s demon, DOUBT; that anti-Peitho goddess, DOUBT. That is there one more chip left in the Doritos bag, D-O-U-B-T.

Oh, but so want to do it! Can I pull this feat off?

In my post Shipwrecked Pirates of the Broad Ripple Canal, I put forth an idea (desire?) of writing a collection of ghosty stories and fairy tales based on my ‘hood and in the spirit of Yeats. I had been reading his collections of Irish tales, and aside from some interesting tales, I was inspired by Yeat’s writing; specifically, his clarity and beautiful penmanship. Yet, I was also enamored by a mystery that I had thunk’ all of me own: how much personal spin did Yeats put to pen of those collected stories? I think a great lot, but I can’t know (although, I bet some Yeats expert has done so). And that possibility of an author dressing up (or dressing down) some ancient tales – and getting away with it with such success-- is what led me to think that I could do the same.

Broad Ripple is a unique area of Indianapolis. Other than its natural wetlands environs and woodland trails and Millennial-inspired eats, Broad Ripple has a true claim to history: its name and its canal. For one, Broad Ripple came to life on the backs of the Irish and Cornish workers who labored –and died – installing the Indiana Central Canal through Indianapolis from where the White River bends to a broad span fit for the crossing wagons and horses and family. (see: Broad Ripple Village History). In 1837, Broad Ripple was more like an Old West Boom town, catering to the Irish workers with a smattering of shanties and saloons and brothels – and, of course, places to worship! Inspired by this, I wrote a personally favorite shorty story/longy posty of two Irish canal workers who were lovers, of sorts, in Places I Will Never Go.

The idea of writing stories based on Broad Ripple probably started there, and more or less led to SoDeRap and definitely led to another one of my favorites, The Cornish Blacksmith's Ghost at one of those suspected brothels; and led to another favorite, The Window in Thicket that takes place at the broad section of the White River.

Obviously, Broad Ripple naturally inspires me. So, whilst reading Yeats whilst sipping Earl Grey (or was that during my licorice tea phase?), I had to wonder, could I do the same? Could I find – or make up – Will-o’-wisp visitations and devilry elf dilemmas in my own backyard? And do it well? Well enough to please you, the reader? Well enough to not offend learned fairy folk like our own Mr. Moir? I mean, fantasy. Fantasy folk like Mr. Moir?

Sure, I could create my own literary license in a corner of my basement lit only by a wired red light dangling over my silver bromide and acetic acid baths. And then, I could collect what stories I have already written and polish them off based on a new creative protocol; a clever outline of specific themes and seriously sensory overload to reveal relevant morals with Broad Ripple points of interest in mind, and.... 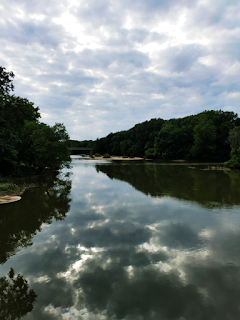