The Bitterness of Hope

Hope is a beautiful thing. The child of Faith and sister to Peace it is that flickering candlelight in the darkness of the human condition. It is the very thing that helps us persevere.

But like all things, there is a darkness to it.

You see, dear friends, my mother has recently fallen ill. I will not abuse you with the details of it all, but it will suffice to say that we've have had a difficult time. There were several moments in the last few days were we (my family and I) thought that she had been called home to rest. My sister and my father told themselves that this was indeed the end. They convinced themselves that there was no way back to us from this illness. I don't believe that they were completely without hope, but they worked hard at sequestering such feelings. There were times, of course, where they were very nearly right.

Yet, knowing that they were shielding themselves against the surety of the heartache to come, I felt that I should let my own hope for her recovery take the majority of my heart. Clinically and scientifically, I knew enough to read the data and judge accordingly. Blind faith has never been part of my persona. I listened to the nurses (never take the doctors at full value), read the monitors, and watched my mother as she fought against the infection. What I saw gave me reason to hope. I was rewarded with progress in her condition. It was a slow progress, but it was perceptible. I grew less worried as the days passed lulling into a fragile peace that things would return to normal.

On the fifth day in the hospital my father and I arrived to find my mother awake, sitting in a chair, and fairly aware of who we were. My hope vindicated. But for my father, this was a cruelty. He was so adamantly convinced that this was the end that this small improvement crashed his defenses and wrecked his heart. It wasn't a physical blow, but it did reduce him to tears. Shortly after that, they came to take her away for a heart scan. He waved at her and she smiled as she waved back. That small gram of hope sent him sobbing.

She nearly died during that procedure.

My sister and father's candle flames guttered in an tempest of grief. Mine flickered wildly in the wind reducing to naught but an ember on the wick, but rebounded once we were told that she still lived and that what they feared was on her heart was not there.

Hope was not lost.

And yet, two days later, my hope has turned bitter. As I feed her and listen to the nurses, it is clear to me that she will live through this. But, the ordeal has taken it's toll. My mother's dementia has worsened. Where before, she could feed and dress herself that is no longer possible. Yes, she will live, but now it won't be possible for her to live at home. My father's own health will prevent him from adequately caring for her. This, of course, means she will have to live out the rest of her existence in a assisted living facility. I was right to hope that she would pull through this trial, but now that I see the life that is left to her, I am weary and sad.

I have hope...but at what cost? 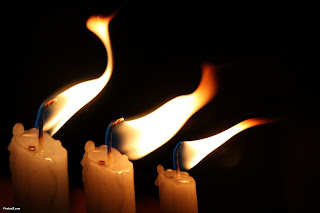