Christmas has come again, dear friends, and it has brought with it my favorite part of the season. I have written about this before, but for those of you who may be new to our blog (or simply need reminding) it is the lights that bring me joy. Whether it is the glint of multi-colored stars on the tree or the clear beauty of a lavish outdoor display, I love the lights of the season. 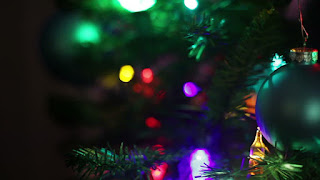 It is no surprise, then, that I tend to be rather extensive in my light displays both in and out of the house. I usually put 600 LED lights on the tree in the living room: 100 lights per foot presents the proper amount of glow without being garish. 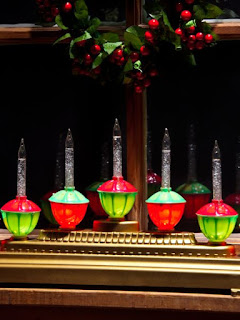 A garland sits across the mantle with bubble lights entwined throughout its length. We have lighted/animated ornaments placed on the tree including the angel who radiates joy in fiber optic glory. And this is only the inside of the house.

Now, normally, I string lights across the gutters of front of the house and the gable over the garage. At our old house, I would use icicle lights across the front as it seemed to fit the style of the house (1937 Cape Cod). However, those sets are fickle and do not hold up well over time. With this house, that type didn't seem to fit as well, so I switched to a more simplistic approach. These past two years have met with moderate success being tasteful, but not overstated.


And then, there was this year. 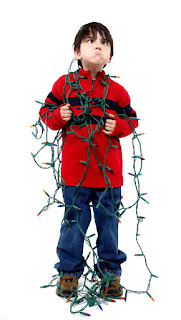 I had fanciful ideas of switching to the LED equivalent of C7's (those are the giant 1950's style lights) this year and wrapping them around the whole house. The weekend was going to be warm and I had high hopes for this year's display. And then, I came down with the flu. I'm not talking just a cold. I'm talking West Nile Avian Swine Monkey SARS kinda flu. Five days later I stood at the foot of my ladder randomly coughing up bits of my lung, looking up at the gutters thinking, "Bah, humbug."


Still, in the spirit of the season, I persevered. I sifted through my old light strands and found that all but three were dysfunctional. It wasn't that they didn't work, but rather that only half the strand worked. I grumbled imprecations about the parentage of these defective lights as I tossed them aside. Undaunted, I began to string up the three remaining strands. Almost immediately, the first strand gave out - half way - only half. Cussing and coughing, i pulled down the strand and started again. The next strand let me get all the way to the end before it too crapped out...half way....only half. 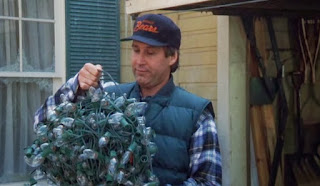 "OK, Universe. I get the hint. Uncle" 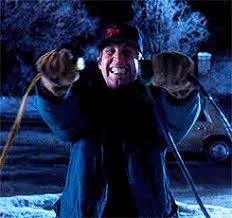 I plugged in the last strand and lo, it worked! I tried it three more times just to make certain, but each time the bright colors of the season sprang to life. But what to do with one strand of lights?

There is a small Eastern Red Cedar growing at the corner of our driveway near the house. It's only about 1.5 feet tall, but it has a pretty shape and I just haven't had the heart to pull it up. So, with Linus and Lucy playing in my head, I wrapped the last strand of working lights on this most Charlie Brown of trees and called it Christmas. 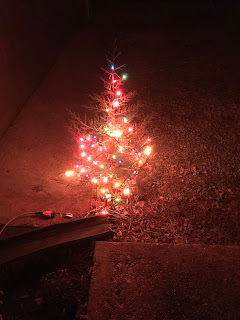