Almost every year, my family and I visit St. Augustine, Florida with the anticipation of finding nothing new: and that’s fine with us. We love the same old town and the same ‘new’ town. We enjoy the same lunch or dinner at Columbia Restaurant, and the same lunch or dinner at Harry’s. We love the same 450+ years of Spanish, Indian, and British history and the pirates who made those rulers sleep restlessly beyond the usual itch of their hay beds. We love the same Flagler College and the same Cathedral Basilica. The town’s unique, Spanish buildings that tower a few flights above the palms haven’t changed in years and thank goodness! The buildings and the exquisitely snug merchant-lined St. George Street…and the Matanzas bay and the coquina Castillo de San Marcos of St. Augustine; the old town is like a perfect, archaeological computer rendering of an ideal colony-on-the-edge-of-the-unknown establishment for an Xbox Empire building strategy game – with combatant superpower backstories included. And Ghosts.

Lots of people have died in St. Augustine in gruesome ways. Thousands of Augustine settlers were murdered by opposing European empires bent on control of the region, or the everyday religious this-and-that persecutions, as well as by the ruinous deeds of treacherous pirates. Thousands of Augustinians died from disease -- and dare I suggest despair; and even more thousands…well, they just died like the rest of us modern folk in America (everything above, but without the cannon balls and pirate raids and in addition to uniquely American ways to die).

Yet, here’s the nub: little has changed in this city by the sea since these foregone Augustinians took their last breath.

In over 400 years, St. Augustine hasn’t really transformed in essence despite raids and fires and removals and diseases and hurricanes and floods and pushy T-shirt shops. It is this static sameness* of St. Augustine that welcomes their most curious spirits to wander familiar streets and inns and squares and castillos instead of seeking their much-earned time-out from all that drama.

*This theory also holds why fruit cakes and the Republican Party are thought to be haunted.

And brah, are they active!

You can deduce the extent of concern by the multitude of companies advertising to search and find these bothersome specters – even requesting the help of tourists willing to volunteer in that search (with a charge… I assume that’s for insurance purposes).


You can detect the worry about town at dusk when dozens of brave ghost hunters take over the city, moving from one cemetery to another, stopping at the inns, alleyways, and crooks-n-crannies in-between. Sangria, live music, and fresh Mahi-mahi – those are just clever facades for the unassuming tourist while Augustinians know to keep the ghost tales on the low while dispensing their wares and praying under their breath the old hollows that haunt their taffy stores and coffee shops elect to hangout at the Ripley’s Believe it or Not down the road.

Even my family and I assisted one of these ghost tours two years ago. We felt like part of the solution. We wanted only to help St. Augustine get to the bottom of this ghost thing by shedding some light on the issue – or pointing a camera. I took several pictures – and studied them when we returned to our hotel. And, while I did not catch a ghost in the act, I certainly caught some bad pictures with thumbs and glaring street lighting made worse by the sea haze.

Regardless, while we living folk enjoy the slow changing scape and history of St. Augustine, we must accept the fact that we share that old town with those entities of the ghostly dimension who, no doubt, appreciate the same coquina walls, hidden gardens, narrow roads, cemeteries, Birkenstock shops, and the fabulous Pirate Museum on 12 South Castillo Drive -- that they have always recognized in their own day.

I raise a (non-alcoholic) Sangria to all St. Augustinians, in all dimensions of existence! Now, where's that Panama Hat shop again? 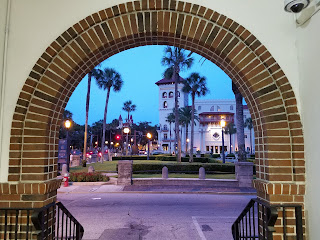 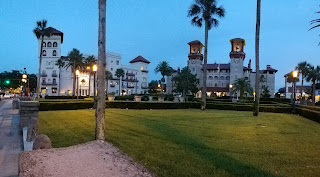 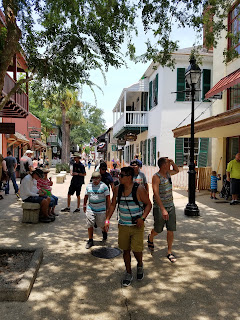 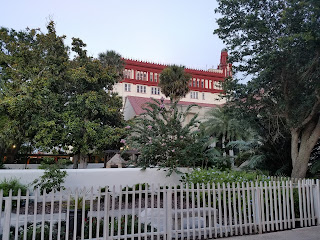 Posted by Randy Wireman on July 14, 2018
Email ThisBlogThis!Share to TwitterShare to FacebookShare to Pinterest
Labels: Wireman