Four years ago - and truly a few years before that - my wife and I were addicted to those house renovation shows. This was due in part to owning a house that was built in 1937 and the endless parade of repairs/upgrades that a house of that age requires. But beyond that, it was because we were preparing for the great migration out of the city. We needed the inspiration for the ridiculously high standards of the modern buyer as well as ideas for what we ourselves were looking for in a house to buy. Such was our addiction to these shows that even now our son will shout, "No more house shows!" if we happen to land on HGTV while surfing the channels. 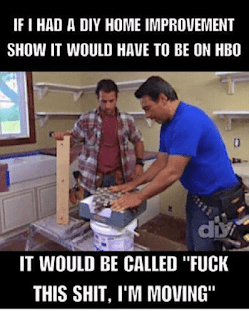 There are many things about these shows that I now find ridiculous. At the time, I was lost in the glamour of tiled back splashes, quartz counter tops, and all things stainless steel. Hand scraped hickory flooring was a thing that all well healed sellers would have invested in the moment they bought their fixer upper. Never mind the fact we could only afford a tube of Burt's Bees lip balm to wax the existing oak floors or asbestos laden subway tiles reclaimed from the demolition of the state loony bin; we were on a mission to make our Old House a jewel. The hosts proferred the magic beans and we said, "Sure, why not? How hard could it be?" 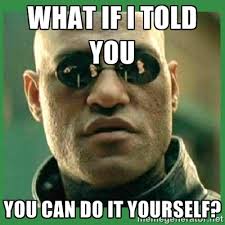 Those of you who have been through this are shaking your heads and thinking, "Sucker."

Now, I am not without some skills in the handyman department. I'm a fair hand with plumbing, basic electrical, and basic to moderate carpentry. But you see, these shows they tend to go way beyond this realm with only a marginal and passing "Don't try this at home, kids." One of their favorite things to do is to knock out a wall here or there to open up the space for that "open concept" that apparently every buyer on the planet wants. If you've ever lived in a house constructed pre-1960, then you know that knocking out a wall with plaster and lathe or even early sheet rock is like major demolition. I'm talking C-4, warning sirens, and everybody get out your smart phones cause we're gonna bring this mother down kinda demolition. Don't even get me started on how hard it is to patch plaster and lathe. It is an art and I was a kid with crayons. 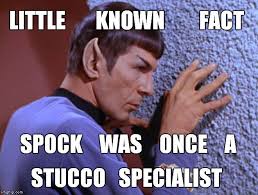 Another thing that I find laughable now, but rather ignored at the time were the people they picked for the house buying shows. Property Brothers was a good one for this, but to be fair, they are based in Canada and the housing market there is vastly different than here. This genre of show would always pick wither the most demanding buyers or people with insanely high and truly impossible budgets.

Him: I sculpt whimsical Civil War dioramas from locally sourced drift wood
Her: I'm a life coach.
Them: Our budget is $500, 000.00 US

Her: I just can't see us in this house because that third bedroom in the back of the house is painted too bright a shade of blue.
Him: This house won't work. There's no place to put my FunkoPop collection. 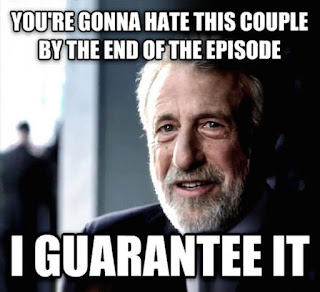 I can tell you, dear readers, that we are not those people. Our budget was...well, let's just say a realistic budget wasn't going to buy that cabin on 15 acres in the country. I like to paint, really. Of all the things that you can change in a house this is usually the easiest. You know, as long as the new high efficiency water heater you had installed doesn't create more steam than the old one that causes the plaster over the fireplace chimney to pucker and fall off the moment you put a paint brush to it.

In the end, we did sell the house for more than we expected. I suspect this had more to do with timing than anything we learned from those shows. We live in a house built in 1984 now and I truly love it. It has drywall that is easily patched with wiring and fixtures that I can buy at a store instead of from oldethanyourgreatgrandparents.com or ohyousorrybastard.org. Oddly enough, since we moved, we no longer obsess over these shows. Weird, that.

So, I will leave you tonight with a post to Facebook that I made during those years as cautionary tale to those who would follow in our footsteps.

"Heard in my basement tonight, "God bless America you wretched piece of unyielding pipe! Get your...stupid...get up there you son of biscuit eating toad. Damn you to hell you f'ing little...I will destroy you and all of your kind in fire if you don't...Son of a...I will eat your f'ing soul if you don't get into that slot...Gaaaaaaa!!!! oh wait...hey, it fit. Cool."