There are moments in a person’s life where reality dispels the illusions we build for ourselves and lay bare the basics of our lives. It is in these times that we discover the fundamental elements that make us who we are. It is the basic programming of our lives that remains when all else is stripped away. One such moment happened to me in the summer of 2017 when my mother was taken to hospital with sepsis.

She was there for ten days. We took turns - my sister, father, and I - sitting by her side as  the doctors struggled to diagnose her condition. It was only after the third day that they were able to ascertain that her bloodstream was infected with staphylococcus oralis, a bacterial infection likely obtained from an over zealous dental cleaning. During this time, and for some time after the antibiotics had started to work, she was delirious. The woman who had been my mother was no longer there, but rather replaced by this frail and gaunt soul in contest against Death.

Yet, as I sat there watching her, there were signs that she was not completely lost to us. There was one constant during those early days even as she drifted in and out of lucidity. She kept folding her sheets. It wasn’t that she was merely turning them over in her hands, but rather taking measure of them with her hands and precisely folding as if to place them straight into the linen closest. The fact that she was lying on them didn’t seem to matter much at the time. She did this with her blankets and wash cloths as well, all the while tsk-ing and muttering at them when she couldn’t get them put right.

It was also during those early days before the diagnosis came through that she came perilously close to passing. I was alone with her as my sister and father were yet to arrive when she settled into a moment of clarity. Her eyes were watery, but clear as she clasped my hand as tightly as she could. She raised her free hand and rested it shakily on my cheek as she smiled sadly at me.

“My boy,” she said weakly, patting my cheek with her trembling hand.

I cried then as I do now at the remembering of it. 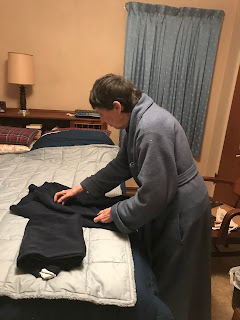 But, this story has a happy ending of sorts. She survived the ordeal and has returned home, though a bit worse for wear. The Alzheimer’s that just begun to take hold prior to her illness is now much more pronounced. Yet, she remembers each of us though  she cannot say our names. Music still comes to her easily despite her losses, especially Christmas carols. Sentences may be beyond her reach now, but tonight as we were folding their laundry, I set Pandora to the “Fred Waring” Christmas channel and we sang Silent Night together word for word as we put the sheets in the linen closest.