Monte Carlo had no issues crawling up Appalachia -- but she wasn’t quite sure why I drove her out here to these foreign lands at her old age. Getting down Appalachia felt more burdensome, and I did my best to keep from rolling us off the mountains. Monte Carlo drank a bunch of gas -- although not as badly as I had calculated before taking my first trip alone with just my 70s built car and my extraordinary naiveté beyond the Hoosier border.

Turn the music up! Monte Carlo had a Sherwood stereo system in her, and we both rode the sounds of New Wave music and listened more closely to its uniquely relatable lyrics. Monte Carlo appreciated my singing, too; because it must have kept her occupied from the worry of us wrecking, or followed by a salivating serial killer, or stranded with bears and Bigfoot, or killed by a falling boulder-- or worse than all that: pulled over by a cop! 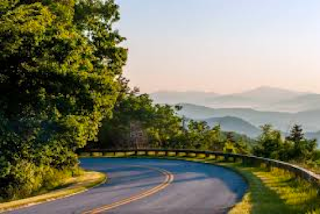 Like Monte Carlo, I appreciated the frequent gas stops. I needed to get out and walk around; to feel my independence and to make sure that I was still confident in executing this trip. Ah, a strange notion, Independence. I felt powerful knowing the ocean was really not too far away at all and that I would succeed in reaching that great wonder -- despite my original self-doubting and my parents excessive worry over Monte Carlo’s condition -- for she carried a lot of her burdens.

Wilmington had its own heaviness, too, with thick sea air and heat that could lull one to naptime. Still...I was ecstatic to have made it to my destination! I struggled to find the downtown, traveling many streets lined with huge, old and somewhat dilapidated mansions and dull, tired, and nearly exhausted shopping centers. Monte Carlo didn't care. She was more relieved to be back to civilization near some mechanics shops, if need be. When I finally found the village, Monte Carlo rolled her windows down to take in the sleepy air, and I cranked up the Eurythmics -- to share with the pedestrians my success at finding them. Monte Carlo and I drove up, down, over, and across that village like we were interested in purchasing the place. This, I asked myself, could be my new home? Sea gulls? Southern homes? Big porches? Faded signs and brick alleys? Old, Civil War monuments? Ocean? 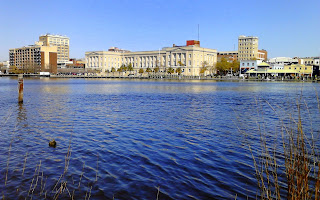 And then Monte Carlo hit the brakes. What the heck?

We were witnessing an anomaly. I must have done a double-take, for Monte Carlo drove us by the scene real slow-like, to make sure what we were observing was accurate. Two men about my age were walking down the street...and they were clearly and undoubtedly, openly and uninhibitedly...holding hands.

Yes. Two young men were holding hands! And while the sun -- hung over them! Other pedestrians -- walking with them, behind them, ahead of them; they did not seem to flinch or recoil or miss a step. And stranger than all, the couple was...smiling?

I parked Monte Carlo – she and I needed to compute this scene.

Interested in Oceanography at the time, I had picked UNC-Wilmington as a possibility due to their well-known science curricula. Texas A&M at Galveston would be my second choice. Actually, reverse that, because I put UNC at the top after reading in some Blue Boy magazine that Wilmington was outrageously gay friendly at that time. Texas, not so outrageously.

I had to know if what I read was true. Seemed awfully convenient that UNC at Wilmington was one of my picks....

That's why I really came to that seaside town in North Carolina. That's why I would eventually leave it. But, before I did leave, I momentarily grew a small spine at the moment. I felt compelled -- despite a truly terrifying sense to escape -- to look for more of this strange new openness.

I parked Monte Carlo up the street. She warned me not to go too far and, before I do just that, to keep her windows cracked so that she could cool off in the hellish heat. Businesses in the village appeared closed or shuttered but for a coffee shop a half-block down and a touristy looking one where Monte Carlo had soon wheezed to sleep. I went through the tourist store, walked down each aisle of trinkets, t-shirts, wind chimes, jewelry, and candles -- but with my eyes on any locals who might give way hints to their orientation. No one appeared to have the slightest urge to entangle each other by the hands like the two guys outside.

What about that coffee shop? I talked myself into checking it out - but not until I grabbed my college-ruled notebook from Monte Carlo where I had shoved stapled UNC information and outlined some forgettable story ideas.

Everybody sat close together in the tiny coffee (and ice cream) shop. It looked uncomfortably close, frankly. I guessed that most of them were students: books opened, young faces glowing in calculations and absolution, and their young bodies clothed in made-to-look-old-but-really-new shirts and jean shorts. A sense of awareness among their kind was obvious to me in an instant. So, it was true after all. Yet, when eyes were eventually cast my way, I instantly crawled into my notebook and scribbled words meant to impress upon the viewer that I didn’t mind his looking -- but, I could take it or leave it because...because I didn't need anything in the world but this here iced tea and this mostly blank notebook.

Time to go. I couldn't do it. I suddenly realized that I opened myself up to receive information that I could not yet calculate in broad daylight, in a coffee shop serving ice cream to handsome men my age -- people more like me than I could ever have imagined existed. And in the daytime?

Monte Carlo knew, too, that I wasn’t ready for such openness. I wasn’t ready for such strange independence. She and I couldn’t escape Wilmington fast enough! What was meant to be a week’s stay became a 4-day trip all around. Monte Carlo and I had no issues flying over Appalachia - and that's about what we did. I returned home to Lafayette, thanks to Monte Carlo’s riding us to our safety and to that vast familiarity; returning us to greet surprised, yet relieved parents who said nothing more of the odd trip that I had planned for months, but in all honesty, failed to execute.

I was accepted, but my dad knew something, too. He knew that I wasn’t ready to live some place beyond Lafayette, Indiana. He knew I wasn’t ready to go to a big school like that way out there -- alone. He laid out a plan for me to go to Purdue - a mere four miles away -- to get on with my undergraduate. Sure, if I was still serious about Oceanography, then he would support me going to Galveston for further education. Only then. Only then.

So, I did what my dad wanted. I stayed.
Yes, Lafayette: where I was born and where I was raised...and where I would remain.
I went to Purdue. I didn't want to take Geology. Didn't they all work for oil companies? I chose a different major: Anthropology. I then chose a different major: Biology. Biology was more practical: Lilly. Industry. Paycheck. Anthropology? Adventurous. Humbling. Paycheck? 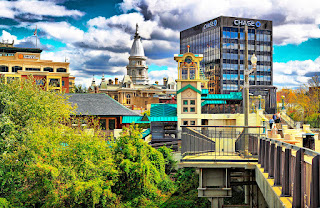 Eventually, I left Monte Carlo to a "friend" who abused her -- and to an extent, abused me. I had made a terrible mistake. The last I had heard, Monte Carlo was sold to someone who wanted to revive her. I would later leave for Indy to join my boyfriend who had just bought a house and was getting tired of driving back and forth -- and who was wanting to settle down. Twenty-eight years later, I am a Biologist working in Academia, as a cancer researcher...and a lab manager of both studies and students. I am a free, gay man partnered to that very same gentle man who beckoned me to stay with him in Barely-a-Ripple, Central Suburbia, Indianaville, living safely, predictably, and peacefully.

Just the same, I don’t know what might have happened if I had actually moved to Wilmington and had become an Oceanographer…if Monte Carlo carried me back up and over Appalachia safely...if we survived the 90s and the death of New Wave so far from home...if we drank sweet tea and ate fresh seafood...if we monitored whale migrations and worked on research boats and if I had traded Purdue Pete for Tar Heel.

I don't know if Monte Carlo and I could've survived that new kind independence; if she could've kept her metal from rusting all those years as I drove us deep into that Wilmington sea of enticing, knowing strange. 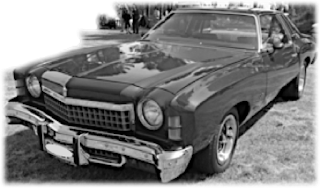 Posted by Randy Wireman on June 02, 2019
Email ThisBlogThis!Share to TwitterShare to FacebookShare to Pinterest
Labels: Wireman