The house was furnished with matching sofa and two chairs, kitchen table, four lamps, some uninteresting paintings of potted flowers, and two single bedroom chambers, and one master bed chamber. Lillian was not happy with the color of the furniture (an unfortunate shade of muddy green), but she was clearly satisfied with the house’s size and condition overall. She wanted to waste no time in finishing the homemaking, eager to shop the stores in the city for supplies and grains, so made a list on the back of an unused Chicago postcard of what she needed.

After a quick lunch of smoked ham and fresh coffee at the house (purchased almost immediately upon arrival to Virginia City), the family left for ‘C’ Street to do purchase the items. The strangely graded blocks of Virginia City took some getting used to and would soon make fit anyone who took to them on a daily basis, if inhaling the gritty smoke could be avoided. Roads were clear, yet icy in places. Thankfully, Virginia City had excellent boardwalks along C Street -- though walking them demanded patience due to the overcrowding. Alastair had never seen such a mixing of classes participating so openly together and consuming from the same hands – the same stores -- as if everyone were equal in wealth and education. English, Cornish, and Irish miners were sharing the same air? Miraculous! And, they were courteous towards each other -- or, so it seemed. He was told the Cornish kept to themselves -- but Alastair clearly heard Breton. A validation of both the isolation of Virginia City and evidence to the odd functionality of this strange American culture and their homogenization experiment was all around him. This was liberty; in all its forms.

Indeed, isolation gave everyone a significant role in the maintenance of civility no matter the trade. Alastair was surprised to find such an array of commerce on a single street: lawyer offices, banks, hotels, grocers, restaurants, saloons, fabric and dressing shops, and assayers – all plying their trade practically on top of the other, each commanding attention with large, often gaudy, advertisements and paid street reciters. Lillian laughed at it all –shook her head at the silliness as if she were watching a circus. The children, too, took it all in as something close to magical. So much that Alastair realized within the first hour that his arms were going to be numb by evening with all the tugging Seán and Evelyn did to get his attention of a ridiculous or marvelous sight.

However, both Alastair and Lillian had to apologize profusely to three elderly Chinese women loading a small cart with bags of grain -- for Evelyn’s probing questions and yes; even her touching their faces.

“You understand, she has never had the privilege of meeting someone like you women.” an embarrassed Lillian appeased. “From China? Yes?” though no response was received.

“Can I help you finish loading your items?” Alastair had offered; and the women appeared to have not understood Alastair’s offer and finished loading their cart without aid.

“You're lucky Evie they didn’t load you up with them.” Seán teased Evelyn, who then gave it some thought and ran to her mother’s safety.

“And you’ll be lucky if I don’t pay them a small fee to carry you off.” Lillian scolded her son.

Alastair was impressed, too, with the selection of fine suits and gold and silver watches available; luxuries that one would least think would be available in such a barren wasteland. Norman Jacob was one particular Jeweler whose silver timekeepers were as fine as any he had seen in Chicago. While in the shop, Alastair found it easy to forget that he was not in a real city.

They spent the entire chilly afternoon on C Street, sightseeing and shopping. Though Lillian said hardly a word as the day progressed, Alastair assumed that she was equally surprised by the number of fabrics and grocers and general merchandise shops available to her. She certainly bought a number of items for the new home – linens, pots and pans, window dressings, three Knapp’s joint dressers, bed pans – anything she could think of as she examined wall after wall of hanging merchandise. The rest, she said, she would order through catalogue.

Much to Lillian’s frustration, Evelyn felt it was her duty to greet every food vendor they passed, and – unable to say no – Alastair paid for whatever fancy Seán and Evelyn wanted: mussels, corn-on-the-cob, and pork. (Evelyn spit out the mussel.) Evelyn kept her parents and brother busy looking for clean cloth to wipe her sticky hands and face. However, Lillian’s patience drained when Evelyn made quite the scene outside a small Confectioner’s; a scene so attention grabbing that Seán had to beg his mother to allow him to hold Evelyn’s hand to barter off a threatened return to the house. Evelyn sobbed for two blocks, so when Lillian and Alastair went inside Whitman’s General (and with a nod of approval from Alastair), Seán ran back to the Confectioner’s and bought Evelyn a bag of chocolate. Evelyn insisted on holding it. Lillian never discovered the transaction, for the chocolate was lost between Whitman’s and their visit to Lorraine Sisters Dress and Fabrique.

By mid-afternoon, the sun had hidden behind Mt. Davidson incredibly early and blanketed Virginia City with a dark and devilish chill. This was due to the height of Mt. Davidson as it stole the sun and cast its shadow over the eastern slope too soon. Alastair was quite surprised at the instant shadow fall; yet, no one seemed fazed by it in the slightest. He then insisted that they have dinner at one of the finer restaurants and get into warmer environs. A Jeweler suggested the International Hotel near the Piper’s Opera House. Lillian said they were not dressed for such “an event”; yet, Alastair talked her into it. The dinner was marvelous and as good as anything in Chicago – or so thought Alastair. Lillian’s mood changed for the worse when Seán, who was especially fond of the lamb chops with crabapple, had made the mistake in asking his mother if she could make her next lamb chops the same way, “… And not quite sour and tart as your jelly.” The table went silent, momentarily.

“Sour and tart, eh?” She looked as if to reason the thought as Alastair set his napkin down. “Tell you what, Lad; why don’t you plan, pluck, and pot the family’s meals for the rest of the month if you so wish to further dictate how to run my kitchen.”

No doubt, an unsettling thought in everyone’s mind, including Lillian’s, for she returned to cutting the lamb in small pieces for Evelyn and changed the subject just as efficiently.

After dinner, Alastair asked the English concierge the best way to get to St Mary’s where he could register his family. Alastair did not appreciate how the man answered. He thought the reply quite snobbish as the concierge had pointed out the window at nothing in particular and then nipped as he turned to leave that they should “find you a carriage.” An expected response from an Englishman, thought Alastair, of his wife’s Catholicism? So in defiance, Alastair suggested to his family that they find their own way to the church that he was told by a pedestrian was just south of D Street. Yet, when they crossed the street and began walking past the coach station, the concierge from the International Hotel came sliding down the alley, hollering out at them to stop and even lunging at Alastair’s arm. Out of breath, he warned Alastair that it was not safe to take his family onto that particular area in the evening -- indeed not at any time, for he would be taking his family very near the ‘vagrant villages’ and to a place where ‘soiled doves’ plied their trade.

Needless to say, Alastair hailed a carriage and ended their first day in Virginia City registering at St. Mary’s -- and meeting a dozen fine citizens and a quick tour of the orphanage.

Overall, Alastair thought they had a marvelous experience, and his family’s stay would be just one of many great adventures! Until, of course…

And, of course that following Sunday morning when the vigilantes hung that poor fellow from the Piper’s rafters and shot a dozen holes into him; perhaps a bit of kindness on their part to allow his soul to escape with ease. 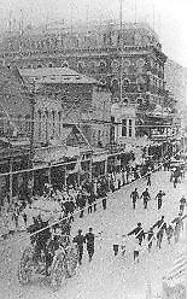 Posted by Randy Wireman on March 15, 2020
Email ThisBlogThis!Share to TwitterShare to FacebookShare to Pinterest
Labels: Wireman