Growing up in Southeast Alaska, my Dad’s house was heated by a wood-burning stove.

We mostly burned logs that would wash up on shore.  We cut the logs into rounds and loaded the rounds in the back of Dad’s truck to take home. Through out the week, we would split the rounds down and pack the split wood into the woodshed to dry.  This was an ongoing process throughout the late spring through early fall.  The goal was to have the woodshed filled by October. 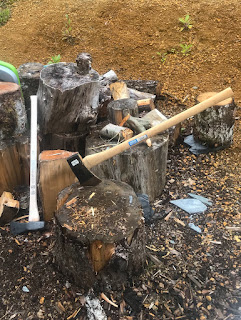 Part of my childhood chores was to start the fire in the stove when I got home from school.  I was always the first one home, and my Dad wanted the stove to be burning hot when he got home from work.

So at the age of 8 years old, that’s what I did each day when I got off the school bus.

Another part of my childhood chores was splinting kindling.  Every weekend I would split enough kindling to last us through the week.

This lasted from the age of 8 until I moved out after high school.

We had a large wood round on the back porch that I would use to split kindling.  It stood about waist high.  My axe was always right next to the round ready for me to use.  Each weekend I would go out to the woodshed, find chunks of dry firewood with straight grains to split kindling.  Red cedar always made the best kindling and it was the easiest to split. 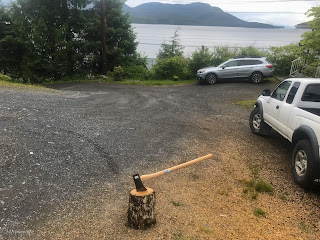 Living in the Midwest now.  When I tell people about how we used red cedar to burn to heat our house, they cringe with disbelief.

Red Cedar is everywhere in Southeast Alaska.  And yes people use it to heat their house--other evergreens, too. Hemlock was the best…my Dad’s preference.

Firewood was part of my childhood.  I loved it and I hated it at times.

After high school I moved to Seattle.  I would come home in the summers to work.   One week during my first summer back, my Dad and I had the house to our selves. The rest of the family was out of town visiting other family.  So it was just my Dad and I batching it.  This meant we mostly ate steak for dinner or just snacked on smoked salmon.  Let the dishes pile up.

I came home from work late one night.  It was about 8pm.  I parked and walked around the back deck knowing that my Dad was probably out back or out in his workshop.  As I turned the corner to the back porch, I stopped in my tracks.
The large wood splitting round that I used to split kindling was covered in blood.  My first thought was, “What the hell.  Why is Dad cleaning a fish on the splitting round.”  Then I looked down at the deck.  Blood everywhere.  It looked like a scene out of a horror slasher movie.  Splattered all over.
There was a trail of blood going towards the back door of the house.  I followed.  Inside was more blood on the kitchen floor.  The trail continued onto the carpet through the living room.  It turned down the hall.  The blood trail continued down the hall.  It turned again into the bathroom.  More pools of blood on the bathroom floor, counter top and sink. What the hell happened was all I could think as I started calling out, “DAD!”

I ran down the hall to my parent’s bedroom yelling, “Dad!” the whole time.  He wasn’t there.  Ran down the hall back into the living room hoping he was lying on the couch.  Nope, no Dad.  I went to other bathroom yelling, “Dad, where are you?”  He wasn’t in the second bathroom.  I looked out the bathroom window that looks out onto the drive checking to see if his truck was still there.  It was.

By now, I was freaked out. 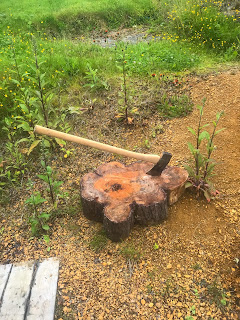 I went out to the back deck and yelled out, “Dad, where are you?”  Just as the words left my mouth, I see my Dad come walking out of his workshop, yelling, “Here I am,” and waving his left arm, which was wrapped in a white towel with red blood blotches seeping through where his hand was inside the towel. A cold Rainier beer was his other hand.

He took a swig of beer and came walking down the stairs from his workshop, and I asked what the hell happened.

He explained that he was splitting some kindling so that he could make a fire in his workshop.  His hand slipped just before the axe hit the wood and his left thumb took the hit from the axe.  He said he wasn’t sure how bad the injury was, and that he couldn’t feel his thumb.

I asked, “Why haven’t you gone to the hospital yet?”

He replied, “It’s fine. It will be O.K.  Besides I’ve had a few beers and shouldn’t be driving.  So I’ve been waiting for you to get home.”

“How many beers?” I asked.
“Two before the accident, three or so after… I don’t know for sure,” he said.

“How long ago did this happen?” I asked.

I told him we had to go to the hospital.

He was not in a hurry. I think he was a bit embarrassed. He wanted to finish his beer so he downed it.   He grabbed another one and said, “I need one for the road.  Let’s go.”

We drove to the hospital. Dad was feeling good from the beer and adrenaline in his system.  He would laugh now and then, calling his left hand nubby.

We got to the hospital and checked him in at the ER. Dad told the nurse that he had a nub for them to look at.  The doctor stitched him up and checked for nerve damage.
He, and his thumb, survived the accident.  He has a little nerve damage but it doesn’t seem to bother him.

20 some years later, he still has a light scar on his left thumb, and me to remind him of his lack of focus. 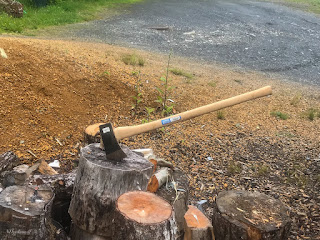 Posted by Nick Dyakanoff on June 14, 2020
Email ThisBlogThis!Share to TwitterShare to FacebookShare to Pinterest
Labels: Dyakanoff